He was kidding. But even if George Mason were a single-digit seed instead of a No. 11, that probably wouldn't matter for historical purposes. This was the greatest run ever to the Final Four. End of discussion.

It's hard to gauge what this historic win has done for this university located just 20 miles from here, one that is named after one of the framers of the U.S. Constitution, an idealist who refused to sign the document because he wanted the abolishment of slavery included (history lesson courtesy of head coach Jim Larranaga). Given that history, though, it shouldn't come as a surprise that the basketball team that bears George Mason's name has plenty of passion.

The Patriots were one of the last five at-large teams to make the field, and all they did was knock off three of the last six national champs: Michigan State (2000) in round one (without GMU's suspended second-leading scorer, Tony Skinn), North Carolina (2005) in round two and Connecticut (2004) at the Verizon Center in overtime in the Elite Eight. Wedged in there was Missouri Valley champ Wichita State in the Sweet 16.

Let's go over this again: The Patriots took out Tom Izzo, Roy Williams and Jim Calhoun, the latter a Hall of Fame member and the first two likely to be enshrined some day.

"I don't know if I've ever seen anything as remarkable," Big East commissioner Mike Tranghese said as he watched Larranaga, his good friend, cut down the nets at the expense of his league's best team. "Connecticut played well, but George Mason played out of [its] mind. It reminded me of the night Villanova beat Georgetown [in 1985 to win the national title]."

"They had to take on Michigan State, Carolina, a really good Wichita State team and the University of Connecticut in overtime," UConn coach Jim Calhoun said afterward. "I feel very, very positive for Jimmy, who is a friend of mine. I wish them well, and they will really enjoy the Final Four."

Littlepage said discussion of the Patriots as an at-large ended a day before Selection Sunday, so this was a late decision but not one that was made at the last minute.

"This is about a good basketball team that went largely unnoticed throughout the year," Littlepage said, although the Patriots did surface at No. 25 for one week near the end of February.

When the bracket came out, though, George Mason athletic director Tom O'Connor -- a member of the selection committee who had to excuse himself when GMU was discussed -- said he didn't think very much of his school's path to the Final Four.

"I didn't because, quite frankly, I didn't think we'd be here," he said.

Now the Patriots will play Florida in the first of two national semifinals Saturday in Indianapolis at the RCA Dome (6:07 p.m. ET). UCLA plays LSU in the second game.

But how did GMU pull this off? Believe it or not, the Patriots thought the bracket was perfect for them, even if O'Connor had his doubts.

The Patriots saw they had a power game inside with 6-foot-7, 275- pound senior Jai Lewis and 6-7, 220-pound sophomore Will Thomas. They knew they also had shooters in Tony Skinn and Lamar Butler and a tweener in Folarin Campbell. 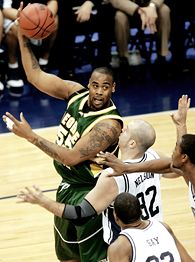 "We knew we could match [up with the teams in our bracket] since they all wanted to run, but if we had them in a half-court game, we had two post guys and guards on the perimeter," GMU assistant James Johnson said. "We had two guys on the block that could score and not a lot of teams have that around the bucket.

"A bad matchup would have been a team that had a lot of guards, a team that liked to dribble drive and dribble penetrate. A team like that could give us trouble," Johnson said.

A team like, say, Villanova, which the Patriots don't have to face now that Nova was bounced by Florida on Sunday in Minneapolis.

The Patriots' regular season could not have hinted at this run. Yes, they were 23-7 entering the NCAAs, but they lost any time they ran up against the big boys (such as Wake Forest and Mississippi State, and those teams ended up struggling). The Patriots did beat Wichita State on the road in BracketBusters, which turned out to be one of their critical wins of the season, but there wasn't a high-major win that stood out.

Apparently, the Patriots didn't need one. The numbers speak for themselves. GMU held Michigan State scoreless for seven minutes in the first half. Against North Carolina, the Patriots held the Tar Heels to under 30 percent shooting. Combined, GMU outrebounded the two power brokers by an average of 39-32.

On Sunday, the Patriots came back from nine down at the half to outscore UConn 40-31 in the second half and then 12-10 in overtime. They made 6-of-7 3s in the second half, while UConn was 1-of-8. They had balance, with five players in double figures. Lewis scored 20 while Thomas and Butler scored 19 each.

Just as impressive, though, was how the Patriots responded after Denham Brown converted a reverse layup that bounced on the rim three times before dropping at the regulation buzzer to send the game into overtime. The Huskies said after the game that they thought they would win it since they had received new life.

"We didn't play defense for five seconds, so I told them, 'Now go out and play for five minutes,'" Larranaga said of his discussion in the huddle after the last possession of regulation. "What you saw us do was go in and out throughout the contest, and as long as we had those four-minute TV timeouts, we'd be OK [for rest]."

Larranaga kept his team loose, even as the Huskies made runs. He kept telling them that if they tensed up, they wouldn't be able to read and react. And here's the kicker: UConn played well, turning the ball over only nine times.

"We couldn't get a stop," UConn point guard Marcus Williams said. "We just couldn't. That's only the second time a team has shot 50 percent against us. ... They beat us on the glass. They went after every loose ball. They made big shots."

"It's very impressive," UConn senior guard Rashad Anderson said of the Patriots' run. "It's just one of those things. They beat us fair and square."

And that's what makes this so sweet for George Mason. The Patriots didn't steal this one. They didn't win on a last-second buzzer-beater. As Anderson said, they won "fair and square."

In the middle of the on-court celebration was school president Dr. Alan Merten. He has center-court seats for home games and is one of the team's biggest boosters. Merten acknowledged that while the university has had two Nobel Prize winners since 1986, the reality is that, at the presidential level, the Final Four can drive conversation.

"I'm going to be at a different table now," Merten said. "I walked by a room the other day that had 10 of our top biologists, some of the best in the world. I walk by and I hear one guy say, 'I was worried about the score at halftime [when Mason was down seven to North Carolina].' So, they weren't talking biology. What this means to us, we don't know yet. One thing it does mean is that we did it right. We did it right."

Check that: They did it right and made history along the way. But the story isn't over yet.

"I hope no one is counting us out, because we could bring back the national championship to D.C.," Skinn said. "It's unbelievable, man. Never count a team out."

Especially not one named after George Mason, a principled Patriot who wasn't about to fold no matter the pressure of the time.