SAN DIEGO -- The instructions were to be patient. Take what the Air Force defense was giving. But Illinois freshman Jamar Smith wasn't exactly listening.

"Any shooter, once you're in the zone, it's hard to take him out," Smith said. "So I just kept shooting."

Even right in front of head coach Bruce Weber, who was in the middle of barking "be patient," Smith picked up his dribble, unleashed a 3-pointer and watched it fall. As he headed back down the floor, the freshman turned to his coach and winked at him.

"Just to let him know I heard him," Smith said. 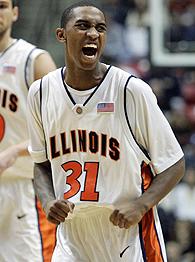 He might as well have been winking to the rest of the country. For Smith's 20-point outburst off the bench in the Illini's 78-69 victory over Air Force sent a message to anyone who was watching at home: The Illini are more than Dee Brown and James Augustine, the two names most people remember from last year's title-game run.

Thursday night against Air Force, the answer was a Final Four contender, led by Smith, who hit 5-of-6 from behind the arc in the second half, sophomore Brian Randle, who chipped in 15 points of his own -- all in the second half -- and junior Warren Carter, who nearly had a career high with 12 against the Falcons.

In the end, on a night when Brown went just 1-of-7 from the floor and Augustine had 10 -- a bucket below his average -- the Illini bench carried the team to victory, outscoring Air Force's bench 32-5.

"People tend to overlook us, I think," Smith said. "But that's OK. We can't pay attention to the outside. We just need to rely on one another and keep our focus in this locker room."

Prior to Thursday's game, Air Force coach Jeff Bzdelik, a Chicago native, showered praise on the Illini, saying that in his eyes their program was right there with the Dukes, UConns and Carolinas of the college basketball world.

But those teams rarely have problems keeping their focus. One year after losing to the Tar Heels in the national championship game, the Illini do. All season long, Weber said, he's found it difficult to motivate a team with just two seniors. On one hand, they have the potential to beat just about anybody. On the other hand, they can lose to just about anyone, too.

"It's been tough, especially late in the season," Weber said. "I thought we would have made some progress as far as the guys getting themselves motivated instead of me having to do it."

But that trend might be changing. Before losing to Michigan State in last week's Big Ten tournament, players say, Weber would continuously stop practice and start screaming and yelling for his players to try harder. Brown and Augustine would do the same.

But since that loss a week ago, practice has been taken to a whole new level. The Illini were publicly irked that the selection committee shipped them to California, away from their fans. And they weren't exactly thrilled about a No. 4 seed and an opening-round matchup against an Air Force team with nothing to lose. But it's all come together to give the team an added sense of focus.

"The negative after [the Michigan State game] is that is you have to go home," Brown said. "But the positive is you're able to learn from it. Everybody gets reminded that if you don't bring your 'A' game this time of year, your season is going to be over."

Thursday, the offense couldn't have been much better, as the Illini shot 58 percent from the floor against the No. 1 scoring defense in the country. For every Air Force run, they had an answer. When the Falcons cut the Illini's seven-point halftime lead to one, there was Smith, draining his first of five second-half 3s. When the Falcons clawed back, cutting the Illinois lead to three, Smith hit another 3 that keyed a 12-0 run, putting Illinois up 15 with 8:48 to play.

And that was it. Now comes the next challenge: Maintaining a sense of urgency.

"These guys don't deal with success well, and that's when we have slipups," Weber said. "But maybe the Michigan State game last week at the Big Ten tournament caught our attention and helped us focus. We'll see."