DAYTON, Ohio -- With 13 seconds to go and jittery George Mason clinging to a three-point advantage, head coach Jim Larranaga got his team's attention and pounded both index fingers into his forehead. Even with a slim lead and the ball, he wasn't about to let his players' concentration lapse.

"In our area, there's a very well-known saying that Dick Motta used when the Washington Bullets won it all," Larranaga said afterward. "'It ain't over till the fat lady sings!'"

A lot has changed since 1978, when a tight NBA Finals against Seattle prompted Motta's sports-cliché. The Bullets are the Wizards now, and the correct term is "plus-sized beauty." On Sunday, Larranaga's poised Patriots held off defending national champion North Carolina in those excruciating final seconds, and their 65-60 win touched off a big, fat capital celebration. 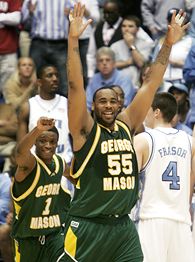 And now, D.C.'s latest bunch of lovable underdogs are headed back home to play for an Elite Eight spot in the Washington Regional. The Patriots are in the Sweet 16 after upsetting half of last year's Final Four teams, and conventional wisdom as well.

"The college game has changed dramatically over the years," Larranaga said. "Quite frankly, there's a lot of parity in the country right now. I think the [selection] committee showed their wisdom and knowledge about the college game. I think the experience that Jim Nantz and Billy Packer have works against them a little bit in the selection show. They're brilliant guys, and I'm a big fan of both of them. But their experience remembers all those great athletes and teams and future pros, and they think it's the same. It's not.

"And ask them how many times they saw George Mason play this year? Definitely not in person. Probably didn't even watch any video on us, so they had no idea going into Selection Sunday what George Mason is all about."

Anybody in Dayton who sat through GMU's two gutty performances now knows what the Patriots are all about. They saw how they survived the first round, despite the suspension of sparkplug guard Tony Skinn. How they rallied from deep deficits. How they weakened their opponents' strengths. Even the coach of the defending national champion Tar Heels -- who watched the first upset from the stands and the second from the sidelines -- was impressed.

"[Friday] night, I thought they gave the most impressive first-round performance I have ever seen in an NCAA Tournament game," North Carolina's Roy Williams said. "Not only did George Mason shoot 60 percent, they outrebounded Michigan State 40-24. They played with great purpose and great passion. I was scared to death, to be honest with you. In saying all that, I thought we were going to win [this] game."

One of the main reasons why the Tar Heels didn't win was a rare coaching mistake, the type of error that fans usually associate with mid-major coaches: Williams forgot what the score was.

With 2:52 remaining in regulation, the UNC coach called a 30-second time out with the score tied and ordered a full-court press. Eight clock ticks later, Tar Heel senior David Noel fouled Mason's Lamar Butler, who then sank what would become the two winning free throws.

Casual hoops fans lucky enough to score tickets for the eight-team Dayton pod might have been expecting a second-round rematch of last year's national semifinal, when North Carolina beat Michigan State, 87-71. But the tickets never said anything about Mid-Major-Palooza -- a plucky George Mason team ran through both squads, and set up a key rematch of its own.

Friday night, the Patriots will try to replicate their season-defining 70-67 BracketBuster win at Wichita State on Feb. 18. But this time around, it'll be on Mason's turf in the Washington Regional, and it'll be a showdown for a spot in the Elite Eight: a Mid-Major Super Bowl, if you will.

So let the CAA vs. MVC smackdown begin.

"It's pretty ironic," Skinn said. "They've been talking about the MVC all year, and nobody's been saying anything about the CAA. It's hard to believe now both conferences are in the Sweet 16. ... I know they think it's revenge for them, but it's home for us."

But before the mid-major media circus starts in earnest, the Patriots' coach is using a far different kind of measurement when it comes to his distant rival.

"I'm looking to have more fun than [Wichita State head coach] Mark Turgeon," Larranaga said. "I want to have more fun than any coach in D.C. I want my team to have fun and enjoy this. For our seniors, this is once in a lifetime. For underclassmen, you never know what's going to happen in the future. This is a game, that's what you play for. The opportunity to have more fun."

Kyle Whelliston is the founder of midmajority.com and is a daily contributor to ESPN.com.