INDIANAPOLIS -- Craig Littlepage took aim at critics of the
NCAA selection committee Monday, even firing back at CBS.

One day after the committee was harshly criticized for its
65-team field, its chairman defended the panel's work saying he
wanted a better working relationship with the NCAA's $6 billion
broadcast partner.

Then, when pressed on comments made by CBS analyst Billy Packer,
Littlepage mixed honesty with diplomacy.

"I think Billy made the comment that he hadn't seen the
Missouri Valley Conference play, but he felt comfortable enough to
talk about their lower level of performance not only this year but
over time," Littlepage said. "It seems to be counterintuitive, if
you will, that he'd make a comment like that." 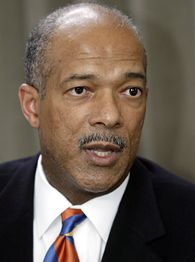 A message for Packer was left with CBS.

Littlepage, the athletic director at the University of Virginia,
praised the 10-member committee for its dedication, thorough
evaluations and ability to work under a challenging deadline.

Some scrutiny, he acknowledged, was expected.

But the scope of the criticism during Sunday's selection show
telecast and on other networks clearly irritated Littlepage.

The controversy from Sunday's brackets seemed as wide-ranging as
the tournament itself -- Packer and CBS aside -- and former committee
member Jim Delany called the criticism unprecedented.

"It seemed to me to be at a higher pitch than before," said
Delany, the Big Ten commissioner.

Among the issues were:

• Cincinnati's omission despite a strong strength of schedule
ranking and a relatively high RPI.

• The at-large selections of Air Force and Utah State, two teams
with lower RPIs than schools such as Michigan and Missouri State --
which were left out of the field.

• Seedings that gave Tennessee a No. 2 seed, higher than either
Southeastern Conference regular-season champion LSU or tournament
champ Florida, and had George Washington dealt an eight seed
in the Atlanta Regional despite having the best record in the field
at 26-2.

But what riled Littlepage was Packer's assertion the committee
look at a five-year track record of teams and conferences.
Littlepage and past committee chairmen have stated regularly that
past performances have no bearing on the brackets.

And Littlepage said the reason teams from the traditional power
conferences fare better in the tournament is that they typically
get higher seeds.

"He may have an opinion about that or the two of them may have
an opinion about that, and they are certainly free to have those
opinions and express those opinions," Littlepage said of Packer
and his CBS broadcast partner, Jim Nantz. "But to look at this in
terms of the partnership, you would hope there would be a little
better understanding of what it is that we do and an accurate
reflection of the facts as they know them to be. Facts, instead of
opinions, would be helpful."

But there were times Monday that Littlepage almost seemed to
plead for empathy.

"I think you can imagine the pressure in that room and the
tension that builds up leading to Sunday," he said. "We're
working on the field up until about 30 to 45 minutes before it goes
on the air."

Since the pairings were released, there have also been questions
about whether mid-major programs were disproportionately
represented on the committee. Littlepage denied that.

He said six of the 10 committee members work at Division I-A
schools, primarily from the Bowl Championship Series conferences,
while only four work at schools with Division I-AA football
programs.

Another issue was how the championships being played Sunday
afternoon complicate the selection process.

"For instance, if South Carolina wins the SEC championship,
that takes a spot away and changes what we've already done,"
Littlepage said.

Delany said the Big Ten prefers playing late Sunday afternoon
because it gives the game more national coverage. If that means
those two teams are penalized, Delany is willing to accept such a
decision.

"We choose to play at that time so whatever the consequences
are, we bear them," Delany said.

Littlepage remained confident, though, that by Tuesday night's
opening-round game between Monmouth and Hampton all the controversy
would fade.

But before next year, Littlepage hopes to find a way to avoid a
repeat of Sunday night's blistering attacks -- particularly on CBS'
selection show.

"I think what we have to have are more conversations about the
partnership and how we need to work better together a little bit,"
he said. "Or at least to have better information and accurate
information out there."