LOS ANGELES -- With a cold turkey sandwich, a plastic plate of pasta salad and a fizzing Dr. Pepper in front of him, UCLA basketball coach Ben Howland is about to reveal the secret. 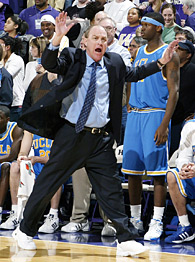 He's about to pull back the curtain and unveil just how he's turned around three different programs in his 12-year career and why the big breakthrough always seems to come in season No. 3.

At Northern Arizona, his Lumberjacks started out 9-17 and 7-19 before going 21-7 in his third season -- the 10th-best single-season turnaround in NCAA history.

And now it's happening for the most storied program in college basketball history. The Bruins were 11-17 and 18-11 in Howland's first two seasons, but this year they are 29-6, Pac-10 regular season and tournament champs, and the No. 2 seed in the Oakland regional. Thursday, they will meet No. 3 seed Gonzaga in the Sweet 16.

So how has Howland done it? Everyone has a theory. Some say it's tenacious, in-your-face defense that has held 15 of UCLA's last 18 opponents at or below 60 points.

Others believe it's his ultra-focused, no-nonsense approach that has turned UCLA into Pitt West, stressing not only defense but also rebounding, toughness and a hunger to win.

But only Howland himself knows the secret. And finally, between bites of that turkey sandwich, with Bob Seger's "Main Street" playing in the background, he's going to explain.

"The thing that consistently works," Howland said, "is getting really good players. I'm a lot better coach when I have great players."

And that's it. You think he's just kidding around. You think he's just being modest. But time and time and time again, through questions about his defensive philosophy and his offensive philosophy, through media sessions in San Diego and Los Angeles, on the phone and in person, the 48-year-old head coach consistently returns to that lone explanation for how he's been able to do what he's done.

"I wish it was the first or second year," Howland said. "But it takes two years of recruiting classes."

At UCLA, Howland points to two players -- sophomore guards Arron Afflalo and Jordan Farmar, who signed on the dotted line when some of the shine had rubbed off the program -- as the critical points in the program's turnaround.

Both are local kids. Both were McDonald's All-Americans. And both had all those key intangibles.

While Farmar didn't even consider UCLA early in his recruiting process and nearly signed with Gonzaga, Afflalo set the tone from the beginning, committing to UCLA within the first two weeks.

"I had heard a lot of good things about coach and his staff," Afflalo said. "I heard he was a disciplinarian, he was a winner. I knew he had done good things at Pittsburgh and UCLA was close to home, close to my family and friends. I wanted to win here."

So it should be no surprise that on Saturday against Alabama, in the second round of the tournament, there were the two star pupils leading the way to victory. Farmar led all Bruins with 18 points while Afflalo hit a key 3-pointer with 35 seconds left to give UCLA a four-point lead. Then, on defense, he got in the face of Alabama guard Ronald Steele as Steele missed a potential game-winning 3 in the final seconds.

But this is about more than great scorers or defenders. The five best high school prospects in the country couldn't win a national championship if Jay Leno were their coach.

So what makes Howland special? How has he pushed the right buttons with his handpicked players? What is it about his personality that makes him a great coach?

For one, he's fiercely competitive, an individual for whom winning is a "relief," while losing is, "pure pain." Every time.

Beyond that, he's intensely focused on basketball. Not golf, not skiing, not television commercials. Basketball. Ask Howland if he's competitive in life away from the court and he looks at you almost confused.

It's no wonder that throughout the basketball season, Howland is lucky to get to bed much before 3 a.m. and rarely is able to sleep beyond 7 or 8. Offensive schemes, defensive schemes, his players, opposing players, made shots, missed shots, it all runs through his head each and every night.

"I try to fall asleep," he said. "I watch film, read the papers, watch the Lakers, flip around, watch ESPN, watch Fox local, do whatever I can. But I have a hard time sleeping."

That's because basketball isn't his job, it's his life. His focus and passion for the game breeds an individual who knows more numbers, statistics, heights, weights and other numerical factoids than most sports research departments.

Just listen to Howland rattle off numbers like an actuarial science major. Gonzaga forward J.P. Batista's weight? Two sixty-nine. His free-throw percentage? Eighty-three percent. Number of free throws made by Ryan Hollins in practice on Tuesday? Seventy-seven out of 100. By Cedric Bozeman? Eighty-six.

All off the top of his head.

It's that incredible attention to every single detail that carries over to his team, especially on the defensive end of the floor. In its last nine games, UCLA's opponents are averaging 54 points per game and .397 from the field. In the regular season, UCLA led the Pac-10 in scoring defense, scoring margin and rebounding defense.

It's an aspect of the game that, when he arrived at UCLA, Howland had to hammer home to his players, many of whom were accused in the past of being soft on the defensive end.

The team has bought in.

"Winning is the base for everything we do," Bozeman said. "Besides, there's really no choice with coach. You either do what he says and play great defense, or you're not going to play. You're going to watch the game next to him on the bench."

With all the attention given to the Bruins' defense, it's easy to overlook the fact that UCLA led the Pac-10 in offensive field goal percentage this season, as well. It all adds up to a balanced team with goals of reaching the Final Four and beyond.

Which is fitting, in a way, because Ben Howland grew up in suburban Los Angeles, staying up well past his curfew to watch the John Wooden-led UCLA Bruins dismantle anyone and everyone who got in their way.

Howland always wanted to play for the Bruins, but he wasn't talented enough. So now comes the next best thing -- coaching them. And although records like 88 straight victories and seven consecutive NCAA championships likely will never be touched, who better to steer UCLA back to its perch among college basketball's elite than a California kid who dreamed of playing in Pauley Pavilion?

"This is my dream," Howland said. "I don't know how many people are living their dream. I'm living my dream."

And on the back wall of Howland's UCLA office sits a constant reminder. There, next to a picture of the 2003 Big East Champion Pittsburgh Panthers, is a giant shot of Kareem Abdul-Jabbar and Bill Walton, standing next to one another, holding their framed UCLA jerseys high above their heads.

"They are the two greatest players in the history of college basketball, and the greatest coach is the man who the floor is named after," Howland said of Abdul-Jabbar, Walton and Wooden. "This place is an incredible place. I'm just very fortunate and feel very blessed every day that I was given this opportunity."

But it's an opportunity with almost impossible expectations. Steve Lavin led the Bruins to five Sweet 16s in his seven seasons but was fired.

Now Howland has advanced the Bruins to the NCAA Tournament's second weekend, the first time for the program since 2002.

What's Howland's stated goal? The same as Wooden used to always say. To be competitive -- year in and year out -- for the Pac-10 championship. And in doing so, to be "in the hunt" for the NCAA Tournament.

Which means only one thing -- getting more Howland-type players.

"I keep going back to what I've said along," Howland said. "It's all about recruiting."