But that was impossible. Morrison's Gonzaga team lost a Sweet 16 game it led until the final 10 seconds, blowing a nine-point lead with 3:27 to play. The emotions of the moment were overwhelming him. His season was over. His college career likely was over after UCLA's 73-71 victory Thursday. And it never should have happened. Not like this.

So, when the final buzzer of the NCAA Oakland Regional sounded, the Zags' All-American forward collapsed. He fell to his knees, then his stomach, and sobbed at the Oakland Arena's center court. It was in this position that Afflalo, running around the court celebrating the second-seeded Bruins' victory, saw him.

"I felt for him," Afflalo said. "He's a great player. There's really no reason for him -- outside of the fact that he's a competitor and wanted to win -- he has no reason to cry.

"He should definitely keep his head up. That's hard to say when you won the game and your opponent lost. But I really just wanted to see him in a good mood."

But good moods are few and far between after collapses like this. People don't smile, laugh and grin after they lose a game they led by 17 points. They don't tell funny stories or reflect on their college careers when they miss their last four field goal attempts; a basket on any one of those attempts likely would have given Gonzaga the victory.

"I hate losing, period," an emotional Morrison said afterward. "I mean, anything, especially basketball. Obviously I'm going to let it all hang out. And that's what I did."

This was supposed to be third-seeded Gonzaga's night. It was supposed to be the night that America's favorite mid-major school from Spokane, Wash., took the next step in its ascension into basketball's elite. The Zags were supposed to win the battle of West Coast basketball powers, giving them a "look at this" victory during the hot and heavy California recruiting wars.

They believed they were supposed to win this game, beat top-seeded Memphis in a thriller Saturday and reach the first Final Four in school history.

With Duke losing earlier Thursday and J.J. Redick falling out of the tournament, Morrison would be the brightest remaining star on the NCAA Tournament stage.

And for the better part of 39 minutes here Thursday night, that's exactly what it appeared would happen. The Bulldogs led from the opening tip, building as much as a 17-point first-half lead.

While the Bruins failed to score a field goal in the first 8:43, Gonzaga seemingly could do no wrong. Morrison fought his way through a maze of screens to make six of his first eight attempts. And guard Derek Raivio chipped in with 10 first-half points of his own.

Everything was going Gonzaga's way. Even in the second half, when UCLA made a run, Gonzaga always had an answer. None more so than Morrison's four-point play, which not only pushed Gonzaga's lead back to double digits, but gave Afflalo, UCLA's best player on both ends of the floor, his fourth foul -- with more than 15 minutes to play.

"I was deflated, personally," Afflalo said.

Afflalo said afterward that he began to wonder whether it simply wasn't UCLA's night. And who could blame him? Morrison was throwing over-the-head passes between draining long jumpers, forward J.P. Batista was dominating in the paint and the Bruins couldn't get much closer than nine. Afflalo had four fouls, teammate Luc Richard Mbah a Moute had the same and things looked bleak.

"You're down like that, and time is not on your side," Afflalo said.

But then, with 3:26 left, everything changed. That's when Morrison scored his team's final points on a pair of free throws for a 71-62 edge. Then the Zags went cold, the Bruins got aggressive and the game was flipped on its side. Before anyone could blink, Gonzaga was up by one, inbounding the ball with less than 14 seconds remaining. 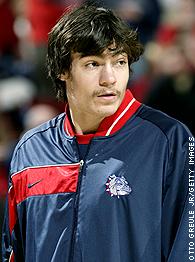 The inbounds pass went to Morrison, who was trapped in the corner. He threw the ball across the court to Batista, who lost the ball to UCLA's Jordan Farmar. Farmar picked it up, threw it to Mbah a Moute under the basket, who scored to put UCLA up 72-71.

"Thank God Luc is 6-foot-7 with a 7-foot wingspan," Farmar said. "I just put it up there and Luc went to go get it and made a great play."

Said Morrison: "I was on the other side and I heard foul," he said. "I assumed they were trying to foul J.P. They didn't call it. That's the way the NCAA Tournament goes. They got the ball and scored."

On the next possession, Mbah a Moute stole the ball from Raivio. After a free throw by Afflalo and a missed desperation 2-pointer by Batista at the buzzer, the collapse was complete.

For the Zags, the final three-plus minutes would look like this: Five missed shots, three fouls and two turnovers. UCLA had scored the last 11 points and won.

"This one won't sink in for awhile," Farmar said.

It sank in immediately in the Gonzaga locker room. There, some 30 minutes after the game was over, those in the room still sat silent. The players in one room, still in their uniforms, not saying a word. Coaches and staff members in another room, sitting in a row of folding chairs, stunned at what they had just witnessed.

Head coach Mark Few couldn't help but think about the what ifs.

"We actually had the ball in the people's hands that we wanted," Few said. "We just had -- gosh -- there were a couple shots that just rimmed out."

Especially from Morrison. One shot, in which Morrison drove down the lane, Few said the All-American makes, "95 out of 100 times." Then there was the fadeaway that Few said he has seen the junior make "a thousand times." And a wide-open 3 by Raivio.

"Either of those shots would have probably effectively ended the game," Few said. "They didn't go. We've been making them all year. That's why we're here. Because guys make those shots."

Morrison, his head down, his words brief, explained the game's final minutes like this: "I missed the shots."

For much of the 2005-06 season, the Bulldogs had played with fire. Time and time again, they had failed to hold leads and Morrison had saved the day in the end. Included in that were the three games prior to the NCAA Tournament -- a one-point win over Loyola Marymount, a four-point overtime win over San Diego and a three-point win over San Francisco. Thursday, against Pac-10 Champion UCLA, that streak came to an end. So, too, did Gonzaga's NCAA-best 20-game win streak.

"This team has been so incredible this entire year, winning games like that and digging 'em out, making big shots, getting that last big stop," Few said. "It just finally caught up to us at the end."

Which is why Morrison laid at center court, his face down, his body numb, his emotions flowing. And why Afflalo felt for his basketball brother. The two had traded words, elbows and passions for the better part of two hours Thursday night. But in the end, they were two human beings.

"They had enough guts as a man to come over in their moment of victory, pick somebody up off the floor," said Morrison. "If I could thank them, I would. That's just a sign of great people and great players.

"It's more than basketball."