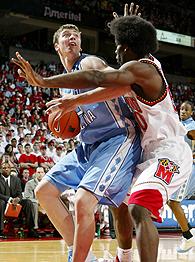 1. North Carolina: Seriously, this is the most talented team. Yes, even more so than Florida, when you factor in the depth on the Tar Heels' bench. But talent alone doesn't win titles.

2. Georgetown: The Hoyas are as hot as any team in the field. Jeff Green might be the only guy who can defend Kevin Durant, if they were to meet in the Elite Eight. Stay tuned.

4. Texas: The Longhorns will go as far as Durant will carry them. When he's on, as he was in the second half against Baylor in the Big 12 tourney, the game completely changes. Hopefully Texas advances far enough so everyone gets a good look.

5. USC: The Trojans didn't show how good a defensive team they are in the Pac-10 tournament final against Oregon. But against Washington State, they did D them up, especially Taj Gibson. If Nick Young and Gabe Pruitt are shooting well and Gibson is blocking and altering shots, this squad can win games in the field.

6. Vanderbilt: The Dores are going in the wrong direction. Still, Derrick Byars was the MVP of the SEC and it's time for him to prove it on this big stage.

7. Boston College: BC limped into the field after squeaking by Miami in the ACC tournament. This team is better than its recent run, but it needs to prove it. If Jared Dudley plays the way he did in the second half against North Carolina, the Eagles will be able to get by Texas Tech in the first round. Tyrese Rice and Sean Marshall must shoot well for BC to advance further.

8. Marquette: The Eagles will go as far as Jerel McNeal can lead them. If his thumb is healthy and he can get out and defend, Marquette has a shot to upset North Carolina.

9. Michigan State: The Spartans have one of the top players in the field in Drew Neitzel. Unfortunately, he hasn't had enough help this season.

10. Texas Tech: The Red Raiders lean on Jarrius Jackson as much as Sparty relies on Neitzel. He needs more help for the Red Raiders to get past the Eagles.

11. George Washington: Credit Karl Hobbs. He found a way to get the Colonials back to the dance. All season Carl Elliott has gone underappreciated. He's one of the better guards in the country. 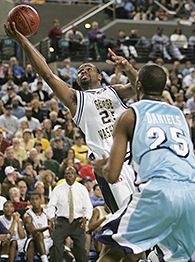 12. Arkansas: Enough with Stan Heath's job security. Are you going to fire him now? If the Arkansas administration had some guts, it would have fired him before the SEC tournament, rather than leak information that a buyout is available. It shouldn't just be "Get in and you're safe." Either he's the right guy or he's not.

13. New Mexico State: The Aggies are Transfer U in this field. They're a bit wild and if Reggie Theus can get this crew to play under control, they've got a shot to play with Texas and pull off an upset. Still, defending Durant will be the toughest task New Mexico State has faced this year.

14. Oral Roberts: ORU has two of the finest players who have received little pub the past three seasons in Caleb Green and Ken Tutt. ORU has the talent to beat Washington State. This could be a grinder of a game.

15. Belmont: Boomer Herndon, a 6-foot-10 center, will have his toughest matchup ever against Roy Hibbert. If Herndon can stay on the floor, the Bruins might be able to make it interesting.

16. Eastern Kentucky: The Colonels have no shot to beat North Carolina. Nothing has occurred this season to give any indication that Eastern Kentucky could pull this off.

Dream matchup: North Carolina vs. Texas. Watching the Tar Heels try to defend Durant would be a real treat. This would be one of the most entertaining games in the field.

You'll grow to love: Washington State's Low and Robbie Cowgill. I know I did watching them in the Pac-10 tournament.

Pressure's on: Arkansas to have a good showing as one of the last teams in the field; North Carolina to get to the Elite Eight at the very least; and Vanderbilt to play to its seed.

Story line that will get beaten to death: The Tom and Tom show of Izzo vs. Crean in the 8-9 Marquette-Michigan State game.