My favorite way to wrap up another season of Bracketology is counting down the 64-team field from the first loser to the last winner. Now, for the third year in a row at ESPN.com, we forecast every game in every round (with every score!) of the upcoming NCAA Tournament.

If these picks work out, thank me. If they don't, blame ESPN.com for running them. But, during my five prior March visits to Bristol, I have projected 12 of a possible 20 Final Four teams. So here goes:

64. JACKSON STATE
This is the team that should have been in the opening-round game against Florida A&M. Not that it will matter when the Tigers come up against the "other" Florida. The Gators roll, 95-69.

62. EASTERN KENTUCKY
The Colonels figure to be overwhelmed on many levels against North Carolina in Winston-Salem. The Tar Heels win in a walk, 101-68.

61. NORTH TEXAS
North Texas has pulled a mild upset or two in the regular season, but Memphis is way out of its league. The Tigers romp, 96-72. 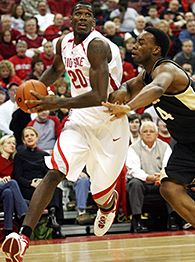 60. CENTRAL CONNECTICUT The committee needs a sense of humor. It should be Blue Devils (CCSU) vs. Blue Devils (Duke) in the first round. Instead, Greg Oden is licking his chops on the way to a 91-72 first-round win.

59. BELMONT
The Bruins might be facing the hottest team in the country. Georgetown calls off the dogs before posting a 73-56 victory.

58. MIAMI (OHIO)
This could be one of the uglier first-round games, especially if Oregon continues to shoot it so well. The Ducks dump the MAC tourney champions, 77-58.

57. WRIGHT STATE
The Raiders will be longing for the Nutter Center by the time their first-round game is over. Pitt wins easily, 81-66.

55. NIAGARA
The Purple Eagles won fairly easily in the opening-round game they should never have had to play. Kansas is a different story, however, as the Jayhawks punish Niagara's porous defense en route to a 90-71 triumph.

54. PENNSYLVANIA
Same players for the Quakers as last year under Fran Dunphy, but less defense under new coach Glen Miller. Texas A&M pulls away in the second half, 91-78.

53. TEXAS A&M-CC
The Islanders are much more dangerous than the average No. 15 seed. Against a less-disciplined opponent I'd like them in an upset. Instead, Wisconsin pulls away late for a 66-55 victory.

52. HOLY CROSS
The Crusaders could win their first-round game with Southern Illinois because it will be low-scoring and close. But the Salukis are too tough defensively. Holy Cross falls, 59-52.

51. NEW MEXICO STATE
The Aggies are here in large part because they hosted the WAC tournament. That won't matter to Kevin Durant and the Longhorns. This one could be tight for a while before Texas pulls away, 84-75.

50. GEORGE WASHINGTON
GW managed to win the Atlantic 10 tournament without having to face either of the regular season co-champions. Vanderbilt is much tougher and considerably more battle-tested. The Colonials are out, 77-70.

49. DAVIDSON
Davidson had a great year and would be very dangerous in another matchup. But I think the Wildcats are facing a cranky Maryland team that will be determined not to make a quick exit. The Terps advance, 80-70.

48. ORAL ROBERTS
Having won at Kansas, ORU won't be shocked by anything in the Big Dance. The "Bobs" hang with Washington State throughout before fading late, 67-61.

47. BOSTON COLLEGE
The Eagles are done and Bob Knight will exploit their weaknesses. Jared Dudley versus Jarrius Jackson is compelling just the same. Texas Tech moves on, 72-61.

46. OLD DOMINION
I've been wavering on this game all week. For me it comes down to which team can solve the stingy defense of the other. Butler has more weapons and eliminates deserving ODU, 67-60.

45. VCU
The Rams are a trendy upset pick, mostly because they are facing a nonvintage Duke team. The Blue Devils won't have much trouble scoring against VCU, though, and this game could be much more one-sided than you think. Duke wins it, 75-67.

44. ARIZONA
If I hear once more "the Wildcats could go a long way if they play together and commit themselves defensively," I'm going to scream. There are 30 games in the books that suggest the opposite. Hungrier and tougher Purdue prevails, 70-66.

43. BYU
The entire Mountain West was pretty much disregarded by the committee. The Cougars should be higher in the bracket, but they'll make the committee look good by dropping a tough one to Xavier, 69-68.

42. ARKANSAS
The "just happy to be here" Razorbacks figure to be drained from both the SEC tournament and their extended travel. Southern California ends their run in overtime, 81-76.

41. UNLV
The Runnin' Rebels got both a bad seed and a bad draw in the Midwest region. Georgia Tech is an extremely talented team waiting to explode. The Rebels bow out, 72-62.

40. WINTHROP
Perhaps the most popular upset pick is Winthrop. I thought about it, too, but ultimately Notre Dame will score too many points for the Eagles to match. The Irish prevail, 81-74.

39. NEVADA
The Wolf Pack got the kind of seeding treatment we saw last year for George Washington. And their opponent, Creighton, is much better than you think. Nick Fazekas ends a terrific career in the first round, 64-60.

38. KENTUCKY
You could make an argument for UK over Villanova, especially with Mike Nardi questionable for Nova. But Kentucky hasn't been nearly as good away from home and loses a tight one, 63-60.

37. INDIANA
The Hoosiers are a year away from making real noise in March. This time they are undone by travel and an opponent that will be more than ready for them. It's Gonzaga in a good one, 72-69.

36. VIRGINIA TECH
The Hokies may be the most unpredictable team in the tourney. Their opponent, Illinois, is playing with house money. I think VaTech goes home early, 75-71.

35. MARQUETTE
The Golden Eagles will be shorthanded in the first round against Michigan State. That swings the balance in a tight, defensive struggle. We're going with the Spartans, 68-64.

34. LOUISVILLE
Everyone is worried about Texas A&M having to play Louisville in Lexington. Not gonna happen. The Cardinals fall to the singular Cardinal (Stanford) 77-73 in overtime.

33. VIRGINIA
The Cavs had a great year, but almost all the good things happened at home. Remember Albany giving UConn a big scare last March? This time the scare turns into a big-time upset, 70-67.

32. PURDUE
A second-round game is a great reward for the long-suffering Boilermakers. Florida wins easily, 79-62.

31. ALBANY
The Great Danes could pull a second upset, but Chris Lofton carries Tennessee in a closer-than-it-should-be second-round game. Albany goes down, 78-74.

30. VILLANOVA
Either set of Wildcats -- Villanova or Kentucky -- will be too drained against powerful Kansas. It's KU over Nova in Chicago, 73-62.

29. MICHIGAN STATE
The Spartans won't be facing an injury-depleted team in the second round. Tom Izzo scares North Carolina before falling late, 77-69.

28. STANFORD
The Cardinal are very good when whole; Texas A&M is very good period. Stanford is out, 64-49.

27. GONZAGA
I'm really, really tempted to ride the Zags in the former golden role as a double-digit seed. But knocking off UCLA in California is asking too much. The Bruins eliminate Gonzaga for the second straight year, 80-71.

26. VANDERBILT
The Commodores have a great shot at the Sweet 16, but playing Washington State on the West Coast is the difference. Wazzu wins, 65-61.

25. TEXAS TECH
The Red Raiders will hang with Georgetown but run out of weapons down the stretch. The Hoyas advance, 75-70.

23. XAVIER
If a No. 1 seed loses before the Sweet 16, it will be Ohio State against the Musketeers. But the Buckeyes escape, 80-76, in overtime.

22. SOUTHERN ILLINOIS
We'll all be talking about Bruce Weber both before and after the Illinois coach eliminates his former team, 66-60.

21. PITTSBURGH
It's Big East versus ACC in a terrific second-round game in Buffalo. And the ACC team (Duke) prevails, 69-67.

20. CREIGHTON
Don't be surprised if the Bluejays win more than once. But Memphis has too easy a time in round one and prevails late in the second round, 71-63.

19. MARYLAND
A second-round matchup with Butler in Buffalo won't be easy for the Terps. The Bulldogs eliminate Maryland in a mild upset.

18. NOTRE DAME
Look for the game of the tournament in the second round in Spokane. First team to 100 wins. Oregon 103, Notre Dame 96 in overtime.

17. WISCONSIN
A bunch of really good teams are going to lose in the second round. And Wisconsin gets a brutal opponent in Georgia Tech. Tech in a big upset, 61-58.

15. TENNESSEE
The Vols kept it close once against Ohio State. Not this time. It's the Buckeyes, and big, 83-66.

14. ILLINOIS
The Illini win two but can't get past Kansas in San Jose. It's the Jayhawks comfortably, 86-75.

12. WASHINGTON STATE
A Sweet 16 game against Georgetown might be the opposite of Oregon-Notre Dame. First team to 50 wins. In this case it's the Hoyas, 67-58.

11. OREGON
The Ducks are fun to watch, but Georgia Tech is better defensively. The Yellow Jackets knock out Oregon in the Sweet 16, 82-76.

10. MEMPHIS
Hard to choose between the Tigers and Texas A&M. The site (San Antonio) makes the difference in a great Sweet 16 game. It's the Aggies, 75-73. 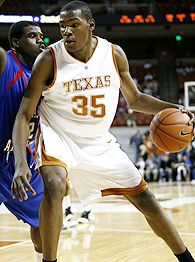 9. NORTH CAROLINA
The Tar Heels are awesome ... on offense. Kevin Durant will exploit their often suspect defense. UNC is out, 91-88.

8. GEORGIA TECH
The Yellow Jackets are thrilled to reach the Elite Eight. Less thrilling is a matchup with Florida. The Gators keep rolling, 72-61.

6. OHIO STATE.
The Buckeyes are penalized somewhat by playing Texas A&M in San Antonio (remember No. 1 Oklahoma versus No. 3 Syracuse in Albany in 2003?). And, like Oklahoma that year, the Buckeyes fall a step short of the Final Four. It's the Aggies, 73-69.

5. KANSAS
The Jayhawks and UCLA are dead-even in a regional championship game. The Bruins, playing in San Jose, get the edge, 76-71.

4. UCLA
Once again, UCLA meets its match against Florida. It's closer than last year, but not close enough. The Bruins go out, 71-64.

3. GEORGETOWN
A great, great year for the Hoyas ends Saturday in Atlanta. Texas A&M moves on to Monday night, 76-69.

2. TEXAS A&M
Yes, the Aggies really are that good. Florida is just better.

Joe Lunardi is the resident bracketologist for ESPN, ESPN.com and ESPN Radio. Comments may be sent to bracketology@comcast.net.