SPOKANE, Wash. -- The smallest player on the court has the biggest green light on Oregon's basketball team. 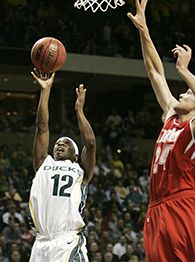 Freshman guard Tajuan Porter, at 5-foot-6, might be the biggest reason the No. 3 seed Ducks have rebounded from a February stretch in which they lost five of six games to reach the Sweet 16 of the NCAA Tournament for the first time since 2002.

With Porter firing from any spot on the court, Oregon has won eight games in a row and advanced to a Midwest Regional semifinal game against No. 7-seed UNLV at St. Louis on Friday night.

"We make sure he looks for his shot," Ducks junior forward Malik Hairston said. "He'll hit one, and the next time you look, there will be another one up and you've never touched the ball. He'll make two or three shots and you haven't even blinked."

Oregon coach Ernie Kent found Porter three years ago, when the Ducks were recruiting Hairston from Renaissance High School in Detroit. The Ducks knew they wanted Hairston, a McDonald's All-American who was ranked among the top 20 prospects nationally. But assistant coach Scott Duncan had to persuade Kent that Oregon needed Porter, too.

"There was this little guy that was just automatic from everywhere on the floor," Kent said. "His coach said a lot of people have been in the gym looking at Malik and everybody saw the same thing you saw. But everybody thought he was too small to play at this level."

Porter, who averaged 26.3 points, six rebounds, five assists and five steals per game as a high school senior, said Oregon was the only school in the country that offered him a scholarship. He led Renaissance High School to state championships in 2004 and 2006.

"Every school in the country told me I was too small," Porter said. "I didn't pay attention to those people. I'm confident in myself and my abilities. I think I can play anywhere."

Porter even had to convince his new teammates he could play at their level.

"When I first saw him, I was like, 'There's no way this dude is starting for us,'" said Oregon senior Aaron Brooks, another smallish guard at 6 feet. "He was so small. I thought he was a project or something." 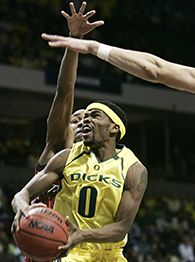 It didn't take long for Porter to make an impression. He scored 27 points in his first college game, a 77-65 victory over Lehigh in the Basketball Travelers Classic tournament in November. He had 28 points against Cal State Northridge in the second game, and 38 against Portland State the following night.

Over the last three weeks, Porter has proved he can play on college basketball's biggest stage. He averaged 20.3 points and shot 13-for-21 on 3-pointers in three games in the Pac-10 tournament. He was named the tournament's Most Valuable Player after leading the Ducks to their second conference tournament title since 2002.

In the NCAA Tournament, Porter had eight points and three rebounds in the Ducks' 58-56 win over No. 14 seed Miami (Ohio) in the first round. Then, in a 75-61 victory over No. 11 seed Winthrop in the second round, Porter scored 14 points and was 4-for-8 on 3-pointers. The Ducks led 33-29 at halftime against the Eagles, and then Porter scored nine of Oregon's first 11 points in the second half. In the first 4½ minutes of the second half, he made three 3-pointers and another long jumper.

"I think I'm a terrible shooter," Porter said. "No, I'm an OK shooter. I still feel like I can shoot better than what I'm shooting now. Every shot I take, I think I should make it."

Kent said he gave Porter the green light before the game.

Porter, 19, said he has always been shorter than most players his age. But that didn't stop him from excelling in basketball. He worked out at a community center in Detroit, where he was tutored by another short player, Rashad Phillips, a 5-9 guard and the all-time leading scorer at the University of Detroit Mercy.

"I'm the average height of a female," Porter said. "Some people don't even think I'm a basketball player."

Hairston, who is two years older than Porter, said the smallish guard scored 38 points the first time Hairston saw him play in a junior varsity game in Detroit. When Porter joined Renaissance High's varsity squad, he immediately became the sixth man. And Porter was a starter on their AAU team, The Family, which also included Kentucky guard Joe Crawford and Memphis guard Chris Douglas-Roberts.

"He plays with a lot of heart," Hairston said. "There's nothing you can throw out there that he's going be scared of."

Against Winthrop, the Ducks even asked Hairston to help in defending 6-10 forward Craig Bradshaw. At one point, Bradshaw caught the basketball in the lane and turned to face the basket. But Porter was waiting for him and nearly knocked the ball out of his hands.

"He couldn't see me, so he traveled," Porter joked.

Kent said Porter's height has never been an issue on the court.

"The kid is a unique, special player," Kent said. "Because of his size, he developed himself into just a sharpshooter. He knows how to get off his shot over bigger people. He goes inside, and he has not hurt all year defensively."

More than anything, Porter alleviated the pressure on Brooks this season. In the past, the senior 6-footer spent much of his time handling the basketball. With Porter sharing those duties, Brooks averaged 17.6 points, 4.4 rebounds and 4.2 assists this season.