When UCLA and Florida played in the championship game of the 2006 NCAA Tournament, the Gators were better. 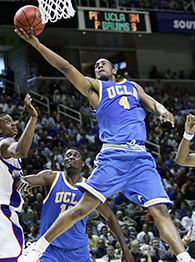 In fact, Florida was much, much better than the Bruins, who were dismantled in a 73-57 loss in their first Final Four appearance in 11 years.

"We were dominated," said UCLA coach Ben Howland, who watched film of the game Sunday. "It was hard to watch because we weren't very good and they were very good."

How much has changed in a year? Howland and the Bruins will find out Saturday night whether they've closed the gap on Florida when they play the defending national champion in the national semifinals at Atlanta's Georgia Dome.

UCLA is seeking its record 12th national championship; Florida is attempting to become the first team to repeat as NCAA champion since Duke in 1991-92.

"Now that it is here, it's a great thing," Bruins guard Arron Afflalo said of the rematch against Florida. "It gives us a path to kill two birds with one stone as far as revenge and the national championship."

The Bruins had better bring a pretty big stone. As hard as it might be to believe, college basketball's most storied program enters the Final Four as an underdog against the Gators, who won their first national championship in the sport last season.

"They're a great team," Howland said of Florida. "They are the team that was picked No. 1 all season and No. 1 entering the tournament, and rightfully so. What they've done all year long with a bull's-eye on their chest is remarkable. They are the best team in college basketball and are better than last year."

The Gators returned nearly intact from last season, after sophomores Corey Brewer, Taurean Green, Al Horford and Joakim Noah each decided to return to school for at least one more season.

Florida lost only one player who saw action in last season's national championship game: reserve forward Adrian Moss, who scored nine points on 3-of-6 shooting in the 16-point victory over the Bruins. This season, senior Chris Richard and freshmen Marreese Speights and Dan Werner are playing more in Moss' absence.

"Noah and Horford are two great players," Howland said. "Both Horford and Noah down the road are future NBA players. They are the best tandem I can remember. I can't remember a tandem that good on any team. We are going to have our work cut out for us everywhere. They have no weaknesses. If you try to take away the inside, the outside kills you and vice versa. We're just going to have to do the best we can."

Although the Gators will bring essentially the same team to the Final Four, the Bruins are markedly different. UCLA lost three starters from the team that lost to Florida in the 2006 national championship game. Forwards Cedric Bozeman and Ryan Hollins and point guard Jordan Farmar, who combined for 37 of the Bruins' 57 points in last season's loss to Florida, are gone. UCLA's five current starters combined to score 18 points against the Gators last season.

Afflalo scored 10 points against Florida last season, and point guard Darren Collison, who replaced Farmar as a starter this season, was scoreless in 20 minutes.

"I think our guys have to understand that last year's game is over and done with, especially with Jordan Farmar being gone and Collison being in the front," Florida coach Billy Donovan said. "They've also got a little bit of a different point guard back there. I'm sure UCLA is excited about the opportunity to play us again. But I can honestly tell you that our guys are excited about playing them again because they know the tradition and history. They have great respect for UCLA. We're going to have two teams that are excited about playing each other, and it's going to be a great basketball game."

The Bruins might be better equipped to handle the Gators' versatility this season. Afflalo, who shot 3-for-10, including 2-for-7 on 3-pointers, against Florida last season, blossomed into an All-American this season. He averaged 16.9 points and 2.7 rebounds and was named Pac-10 Conference Player of the Year. Sophomore Josh Shipp, who missed all but four games in 2005-06 because of a hip injury, averaged 13.1 points and 3.9 rebounds in his return this season. Collison, an ultraquick point guard from Rancho Cucamonga, Calif., averages 12.8 points and 5.7 assists.

"We were so happy last year because nobody expected us to be there," Collison said. "This year, we knew what to expect and everybody knew what kind of team we were. Now, we've got to go get the job done."

Howland believes this Bruins team is playing better than the team he took to the Final Four in 2006. In last season's NCAA Tournament, the Bruins needed a 3-pointer from Afflalo with 34 seconds left to beat undermanned Alabama 62-59 in the second round. In the regional semifinals, UCLA trailed No. 3 seed Gonzaga by 17 points late in the second half and by 10 with a little more than three minutes to play. The No. 2 seed Bruins scored the game's final 11 points and won 73-71 after Luc Richard Mbah a Moute scored a layup with 10 seconds to go.

"We had a little luck on our side," Howland said.

This season, the Bruins beat No. 15 seed Weber State 70-42 in the first round, then largely dominated Indiana before winning 54-49. UCLA also had few problems in beating No. 3 seed Pittsburgh 64-55 (the Bruins led by 12 points in the second half) and upsetting No. 1 seed Kansas 68-55 in the West Regional finals.

"I think these wins have all been solid wins," Howland said. "We have a lot of players that have been there now. I think they can draw upon that experience of having been not only to this point a year ago but went to the Final Four and won a game."