And the defending national champion Gators played much, much better than the Buckeyes.

The Buckeyes' second big road test of the season turned out to be a game they'd prefer to forget, especially as they prepare to play Florida again in Monday night's national championship game at the Georgia Dome. On Dec. 23 in Gainesville, Florida blew open a close game with a 31-7 run to win 86-60 at the Stephen O'Connell Center.

In the end, the game turned out to be Florida's most complete performance of the season, as well as a revelation for the Buckeyes, who have won 25 of 26 games since that humbling defeat.

"Florida went on a run," Ohio State coach Thad Matta said. "They blitzed us. They were making shots and they were getting stops. They really took the game to another level and we weren't mentally ready to get in the fight with them. Florida beat us and they beat us good down there."

After the Gators completely dismantled the Buckeyes during the second half -- Florida shot 60.3 percent, including a whopping 74.1 percent in the second half -- it was clear they would be tough to beat in their quest to become college basketball's first repeat national champion since Duke in 1991 and '92.

And it was pretty evident the Buckeyes, with two freshman starters and three key rookie reserves, still had a lot of growing up to do if they were going to become a legitimate Final Four contender.

More than anything, the Buckeyes had to get Oden healthy. The 7-footer from Indianapolis missed the team's first seven games after undergoing surgery on his right wrist in June. He had averaged 15.5 points and 8.5 rebounds in four games before facing the Gators, but then was neutralized by Horford and forward Joakim Noah.

Oden was still shooting free throws with his left hand and rarely used his right hand while working in the post. He scored seven points, grabbed six rebounds and blocked four shots against Florida, but scored only one point in the second half. The game also was a preview of the foul trouble that has plagued Oden during the NCAA Tournament -- he picked up his fourth foul against Florida with nearly eight minutes left to play.

"He's a monster," Noah said after the first meeting. "I've never played against anyone like that dude before."

And now Oden is much, much better, at least when he's on the court. He has played only 18, 24 and 20 minutes respectively in the Buckeyes' last three NCAA Tournament games, and played only 161 seconds in the first half of his team's 67-60 victory over Georgetown in the national semifinals on Saturday night.

"It's just being more in shape, being able to feel comfortable with my teammates because back then I was just getting involved with the offense," Oden said. "My teammates were getting used to me being out there on the floor. Now we've been out there for a while. I feel more comfortable with them. I'm just in better basketball shape."

The Gators can see how much Oden progressed this season. He led the Buckeyes in scoring and rebounding and was named first-team All-American.

Horford, the Gators' third leading scorer and leading rebounder, also is healthier than he was during the first game against Ohio State. He played Dec. 23 despite having a badly sprained left ankle that caused him to miss the previous two games and much of practice. Horford played cautiously in the first half against the Buckeyes (he grabbed six rebounds, but didn't score and took only two shots), then scored 11 points in the second half.

"He had not played or practiced for a while," Florida assistant Larry Shyatt said. "It was a blessing for him to have the second half he did."

The Gators attacked the Buckeyes like they've attacked most opponents this season. With Horford and Noah getting so much attention in the post, guards Taurean Green and Lee Humphrey and forward Corey Brewer had ample opportunities to knock down shots on the perimeter.

Green scored 24 points on 9-for-12 shooting (with four 3-pointers) in the first meeting. Brewer scored 18 points on 7-for-13 shooting, and Humphrey had 12 points and two 3-pointers.

Matta said Florida's balance is what makes them so difficult to defend. 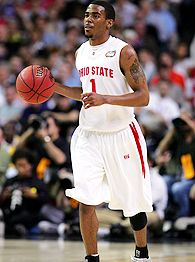 "We've called it the 'big ball' package," Matta said. "The thing that makes it so great is you've got two guys outside that can shoot the basketball as proficient as Humphrey and Green. Those guys can all finish inside. They get great rebounding position when they do that. That's the power of having that type of depth with that that type of size."

"Those guys are so interchangeable that I think it will probably be about a 50-50 deal," Matta said.

Shyatt, who scouts many of the Gators' opponents and recommends defenses to coach Billy Donovan, said the Gators probably won't change much of what they did in the first meeting.

"When you're at the level these two teams are at, it's tough to change a great deal at the end of the road because you've had so much success," Shyatt said.

Donovan said he doesn't expect the previous meeting to have any impact on Monday night's game because the Buckeyes have grown up.