SACRAMENTO, Calif. -- Beauty is when the right guy steps up at the right time and makes all the talk about him come true. Or, to borrow from Vanderbilt guard Dan Cage: "Derrick Byars is the best player on our team, he played the best on our team today, and we get to play another day."

In fact, what Byars, the SEC's Player of the Year, went through before achieving grace at the second round of the NCAA tournament on Saturday was more like dueling glass shards at 20 paces than anything approaching a flow. The senior clanked jumpers, got stripped, turned the ball over. Washington State in general, and Kyle Weaver in particular, dogged him at every turn, contesting every shot. By halftime, Byars had missed six of his eight attempts.

And, of course, it didn't matter in the slightest, because in the end, Byars again became who he is, which is what the great ones usually do. And not only did sixth-seeded Vandy pull off the upset because of it, but the Commodores also clarified once and for all that they'll proceed in this thing precisely as far as Byars can take them, be that to Georgetown or beyond. 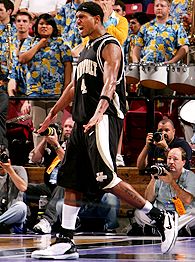 By the time Byars walked off the Arco Arena floor after his team's electrifying 78-74 double-overtime victory over the third-seeded Cougars, several things had happened. First, Vandy coach Kevin Stallings had characteristically fired his clipboard to the ground in anger after a blown defensive assignment, in this case by Cage. ("I don't do that," Stallings joked afterward.) Second, the Commodores had been sufficiently befuddled by Cougars coach Tony Bennett's defensive schemes that they were trailing WSU 51-43 with about 12 minutes left in regulation.

And third, Derrick Byars had woken up. He found his game right out there in the middle of the court. It's always in the last place you look.

Byars in the second half and through both overtimes was the revelation that his Vanderbilt teammates often insist the rest of the country is missing out on, and maybe it takes an NCAA tournament appearance to throw such quality into bold relief. It almost took that long for Byars, who finished with 27 points, to come alive and find his shooting stroke from outside. When he did, he took the game along with him, and the cool thing about it was the seeming self-will involved. Byars just gathered himself together and took over.

"I can't describe what it was," Byars said afterward. "I just didn't want to lose ... It was probably the best game I've ever played in."

If that's so, it's in large measure because Byars himself started playing, not watching or simply struggling. The man played, and Washington State's Weaver should know -- he was the guy trying to prevent that from happening.

"He kept finding ways to get open," said Weaver, who did an extraordinary job on Byars for much of the game before appearing to wear down in the overtimes. "He used screens well and got some good looks, but he made some tough shots, too. I was trying to do a lot of things on both ends of the court, and chasing Byars around was tough."

After feeding teammate Alex Gordon for an open 3-pointer, Byars stepped forward and knocked down the next trey himself -- and not only was it suddenly a 51-49 game, but, according to Stallings, the Commodores began to get an inkling of what was about to happen to their best player.

"When he got that look," Stallings said, "then all of a sudden the momentum and the energy got going on our bench. It was like, 'Uh-oh. This could get fun.' "

It got all the way to thrilling. Byars' next shot, another 3-pointer, gave Vanderbilt a 52-51 lead and set the stage for one of the great grinding finishes of the tournament so far -- and almost all of it involved Byars, one way or another. He scored another huge bucket down the stretch, got blocked by WSU's Ivory Clark as he attempted to give Vandy a lead inside the final 25 seconds of regulation, and then turned in the saving play of the game when he chased down the Cougars' Taylor Rochestie on a fast break and blocked Rochestie's attempt to win it for WSU at the end of the first overtime.

In short, Byars got tall. And while he unquestionably had help, especially from Shan Foster's 16 post-halftime points (and a great second OT) and some inspired work from senior center Ted Skuchas, there was no doubt why this game turned. It turned because Derrick Byars caught fire.

Byars, who transferred to Vanderbilt after two years at Virginia, managed to be named the SEC's Player of the Year without showing up on the national radar, perhaps because he averaged a relatively low-key 16.8 points. But his penchant for big plays in big games was already established -- 24 points in Vandy's victory over then No. 1-ranked Florida; 26 in a late-season victory over Kentucky -- and what he demonstrated against Washington State was a quintessential star attribute: the ability to get his own shot.

How that will play against Georgetown next week in the Sweet 16 is the question that determines Vanderbilt's tournament trajectory. But Byars, who had said his college career would be capped by an NCAA appearance, has already left one impression.

"This whole game happened so fast, things are a blur right now," Cage said. "But I'm getting little images in the back of my brain of all these winning plays Derrick made. And that's what we call them: winning plays."

Byars made them, which is what he's supposed to do. It's what they expect of the greats.

Mark Kreidler's book "Four Days to Glory: Wrestling With the Soul of the American Heartland", published by HarperCollins, is in national release. A regular contributor to ESPN.com, Kreidler can be reached at mark@markkreidler.com.