If Gene Keady wants to leave Purdue to coach the University of San Francisco, the Boilermakers will not stand in his way.

Keady, who has coached Purdue to 505 victories in his 24 years with the program, interviewed for San Francisco's vacancy on Tuesday. Keady, who has one season remaining on his contract, told ESPN.com on two different occasions Thursday that he "has made no decision" on his future, and when he does "there will be a memo or a statement." 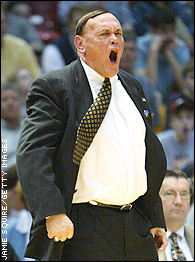 "The contact from San Francisco happened before Coach Keady and I had a chance to talk in detail about the future," Purdue AD Morgan Burke said in a statement, "but we will not stand in his way if he wants to pursue this opportunity That said, Gene knows that we are committed to him through the final year of his contract.

"When we know more, we will make that public."

A source told ESPN.com that, at this point, it's "50-50" whether Keady remains at Purdue.

Keady told his assistants early this week that he was leaving for California but didn't say where or why he was traveling. Keady interviewed with University of San Francisco athletic director Bill Hogan, whom he came to know during Hogan's 1982-91 tenure as coach and athletic director at St. Joseph's College in Rensselaer, Ind.

Keady is Purdue's all-time winningest coach (505-249). The Boilermakers have not reached the NCAA Tournament three of the last four seasons. After beating Sweet 16 finalist Duke to win the Great Alaska Shootout at the start of the season, Purude finished 17-14 (7-9 in the Big Ten) and lost to Notre Dame in the first round of the NIT.

Keady, 67, is a candidate for the Basketball Hall of Fame -- selections will be announced at the Final Four in San Antonio. He's led the Boilermakers to 18 NCAA Tournament appearances, going 19-18 with Elite Eight finishes in 1994 and 2000. Purdue reached last year's tournament, beating LSU in the first round before losing to Texas.

If Lavin is hired, Martin would likely be his top assistant.