Seven days after declaring he had no interest in leaving Xavier
for the vacant Ohio State basketball coaching job, Matta accepted
the position on Wednesday.

"As of last night, I was not going to go to Ohio State," Matta
told Cincinnati television station WCPO on Wednesday night. "I
spoke with Mr. Geiger late last night and through our conversation
decided to go up there today. And 6:30 tonight is basically when I
accepted the job." 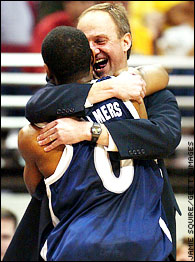 "We have extended an offer, he's accepted it and we're excited
about it," Snapp said.

Xavier athletic director Dawn Rogers confirmed Matta's hiring in
an e-mail to The Associated Press shortly after she received a call
from him early Wednesday evening.

"I always had the uneasy feeling that Thad might be the next
Ohio State coach," Rogers said at a news conference Wednesday
night. "Ultimately he did what he needed to do to be where he
wanted to be as a coach."

Geiger said it wasn't easy for Matta to leave Xavier.

"I talked with him in person and on the phone several times. I
don't know [that] he was always interested in the job. He has very
strong feelings about Xavier, and it was difficult for him,"
Geiger told The Columbus Dispatch.

Matta was expected to meet with the Xavier team members Wednesday night while assistant Sean Miller was going to meet with Xavier athletic director Dawn Rogers. Miller is expected to take over as head coach of the Musketeers.

Rogers told the AP she would move quickly to find Xavier's next coach.

"I am confident we will secure a national caliber coach who
supports the mission of our university," she said.

Matta, who will turn 37 on Sunday, interviewed with Geiger,
members of the search committee and Ohio State president Karen
Holbrook on Wednesday morning.

He was offered the job soon after the search committee met for
45 minutes at Ohio Stadium on Wednesday afternoon.

Matta, who took Xavier to the NCAA tournament's regional finals
in March, was one of three coaches interviewed on campus this week.
The others were Rice's Willis Wilson and Vanderbilt's Kevin
Stallings. Interim head coach Rick Boyages was to be interviewed on
Wednesday but apparently did not meet with the search committee.

Ohio State fired Jim O'Brien after seven years on June 8, six
weeks after he admitted to Geiger that he had paid a recruit $6,000
in 1999. NCAA and Ohio State investigators also are looking into
allegations by a Columbus woman that she gave thousands of dollars
to former Buckeyes player Boban Savovic and paid his bills and did
his homework for two years.

Matta had a 78-23 record in three years with the Musketeers. He
was 24-8 in his only season as head coach at his alma mater,
Butler.

Matta served as an assistant at Indiana State, Butler, Miami of
Ohio and Western Carolina.

Matta was thought to be one of the favorites for the Buckeyes
job -- which pays around $1.2 million a year -- from the beginning.
Ohio State asked Rogers for permission to talk to Matta two weeks
ago.

Asked then whether he was interested in the job, he denied it.

"I'm not a candidate. It's that plain and that simple," Matta
told The Cincinnati Enquirer on June 29.

He has ignored other job openings, saying he could not fathom
leaving Xavier.

"I'm not a very public person, so nobody's ever going to know
how happy I am at Xavier," Matta said last week. "Our players
have three [Atlantic 10 championship] rings in three years. We've
been to the round of 32, round of 32 and Elite Eight. I'm sitting
here and I probably have one of the longest contracts in the
country. I love that."

Within the last week, however, there was a major shift in
attitude.

"I'm a Midwest guy, I grew up in the Big Ten and think having
the opportunity to get what I conceive is the best job in the Big
Ten, I feel very fortunate at that," Matta told WCPO on Wednesday.

The top candidate to replace Matta is associate head coach Sean
Miller, a former guard at Pittsburgh. Miller has been an assistant
under Matta the last three years at Xavier and before that was an
assistant for five years at North Carolina State.

Rogers said finding a new coach would be a top priority.

"We're going to move as quickly as we can," she said.

Matta's contract at Xavier ran through the 2012-13 season.

Information from ESPN.com's Andy Katz and The Associated Press was used in this report.