PHILADELPHIA -- Former La Salle University men's basketball
coach Billy Hahn took no action a year ago when first approached by
a female student who says she was sexually assaulted by one of his
players.

But Hahn, who acknowledged his inaction at a news conference
Tuesday, denied ever discouraging the woman from going to police,
and said he kept silent about their conversation at her request. 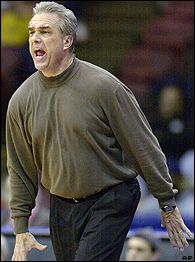 Hahn resigned last week after two of his former players were
charged with raping a 19-year-old woman who had been working at a
youth basketball camp run by John Miller, the coach of La Salle's
women's basketball team. Miller also resigned.

During the investigation that led to those charges, a second
woman came forward and allegedly told police she had been sexually
assaulted by another male basketball player at La Salle in 2003
while she was a member of the women's team.

The woman said she had informed both Miller and Hahn that she
had been assaulted, but decided not to file charges when the
coaches discouraged her from doing so, police said.

Hahn acknowledged speaking to the woman about her problems with
the male player, but said his decision not to contact authorities
or school administrators was made at her request.

"When a serious allegation like this is made, coaches cannot
extend that confidentiality to a player," Nastasi said. "If a
student has that kind of problem, they shouldn't put their coaches
in that position of requesting confidentiality."

In previous interviews, Miller has told a similar story, saying
the woman asked him to keep their conversations about the matter
private.

Both coaches have declined to say exactly what the woman told
them during their meetings with her in 2003.

Hahn said at his news conference that he intends to spend the
next year traveling to college campuses and speaking about the need
for students and athletes to act more responsibly and curb underage
drinking.