PHILADELPHIA -- John Chaney extended his own suspension by
banning himself from the Temple sidelines for the Atlantic 10
tournament.

The Hall of Famer continued a week of apologies and punishments
Monday when he announced he won't return after the school's
three-game suspension ends with the close of the regular season. 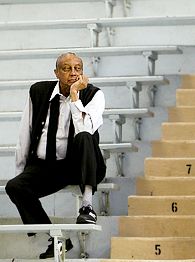 "I believe the fair thing is for me not to coach during the
Atlantic 10 championship tournament in Cincinnati," the
73-year-old Chaney said in a statement.

Temple athletic director Bill Bradshaw told ESPN.com's Andy Katz late Monday night that this decision came from Chaney, and not from the administration.

"John feels this is the right thing to do. We never talked about him missing Cincinnati [site of the A-10 tournament]. It never came up from the conference or from us," Bradshaw said.

Bradshaw said that when he saw Chaney Monday afternoon, the Hall of Fame caoch did not mention that he was going to suspend himself from the conference tournament. Chaney made the decision early Monday evening on his own.

Chaney first suspended himself for one game and then had the
school extend it to three games over his ordering rough play from
one of his players in a recent game that resulted in an injury to
senior John Bryant of Saint Joseph's.

If the Owls reach the A-10 championship game, there's a chance
they could play the Hawks again.

"Now, when we go to our championship, it will be one less
distraction," Atlantic 10 commissioner Linda Bruno said Monday.

"On behalf of Saint Joseph's University, I accept the measures taken in response to the events of last week," Lannon said. "The willingness of Temple coach John Chaney to meet with John Bryant and family on our campus and later remove himself from the Atlantic 10 tournament is most appropriate."

"The overwhelming feeling within the Saint Joseph's community is that the remedies first announced by Coach Chaney and Temple University did not fully address the severity of what occurred," Lannon wrote. "We believe it is the role of institutional and conference officials, not solely an individual coach, to demonstrate the necessary leadership in upholding the league's code of conduct and assuring the safety of student-athletes in competition."

Phil Martelli, the quick-quipped Hawks coach, has refused to
comment and declined to participate in Monday's A-10 coaches'
teleconference -- the same one on which Chaney last week threatened
to take action if the Hawks continued setting what he thought were
illegal screens.

Chaney followed through on his threat, using Nehemiah Ingram to
"send a message." Ingram fouled out in four minutes, including
the hit on Bryant that left the senior sprawled on the court for
several minutes. An MRI later revealed he had a broken arm that
ended his season and college career.

Chaney had apologized to Bryant and his family and offered to
pay his medical bills. The coach met with the family of Bryant on Sunday on the Hawks' campus. According to multiple sources, the meeting was "very tough" for Bryant's family.

Chaney on Monday apologized again in a
statement to Bryant, both schools and the conference.

"I never intended -- nor did any of my players intend -- for
anyone to be injured, regardless of what may have been said
emotionally before, during and after the game," Chaney said. "But
the unfortunate fact is that John Bryant was injured. I have taken
full responsibility for my words and actions, and have apologized
from my heart."

Bruno said there were no plans to take action against Ingram,
who apologized after Saturday's game.

"You just have a young man that was following what a coach told
him to do," she said. "[Chaney] didn't tell him to break a young
man's arm, but he told him to issue hard fouls. We felt he was in a
game situation and doing what he was told to do."

Chaney is still coaching the Owls at practice, though he won't
attend any of their games. Assistant Dan Leibovitz is coaching the
team.

The Owls (14-11, 10-6) clinched a tie for second place in the
Atlantic 10 East Division. A Temple win or a Fordham loss will earn
the Owls a first-round bye in the conference tournament.

A Temple spokesman did not know if Chaney would be allowed to
coach in the postseason. The Owls could earn an automatic bid to
the NCAA tournament by winning the A-10 title. Even if the Owls
lost their last three games, they would finish with a .500 record
and be eligible for the NIT.

Bruno said it would be up to Chaney or Temple to decide if the
coach should continue in the postseason.

Chaney avoids another distraction in returning to Cincinnati for
the conference tournament. Last month, Chaney scolded the people of
Ohio, the state that helped President Bush win re-election with 20
electoral votes, saying, "It's not the people I hate, it's what
they did that I hate."

Information from ESPN.com senior writer Andy Katz and The Associated Press was used in this report.