Prodigal center Randolph Morris is returning to Kentucky, sources told ESPN.com. The question now is what it will take for him to be eligible to play his sophomore season.

The 6-foot-10 center declared for the NBA draft after his freshman season and went undrafted. Since Morris did not sign with an agent he was eligible to return to college, and he and coach Tubby Smith reached agreement on his return to Kentucky. 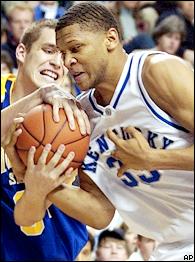 In a prepared statement Monday, Smith said Morris asked to come back this weekend during a meeting between the coach and Morris' family. "... I told him there is a place for him on this basketball team," Smith said.

"However, the eligibility issues that stem from his NBA workouts this summer are still being addressed. Our compliance office is assisting the NCAA as they look into this matter," Smith said. "The NCAA has been very helpful and they understand we would like a timely resolution."

Morris had individual workouts for a number of NBA teams and took part in a workout with a number of players in Chicago that was sponsored by the SFX agency. SFX also put out a statement on Morris' behalf saying that he would stay in the draft.

According to NCAA rules, Morris will have to make restitution for whatever expenses NBA teams covered in the course of the workouts. The Houston Rockets worked out Morris and a representative of the organization confirmed to ESPN.com last week that Houston did pay for Morris' expenses. The NCAA also will look into the extent of Morris' relationship with SFX in an attempt to discern what services the agency performed for him.

It is likely that Morris will have to sit out some number of games in 2005-06. Former Mississippi State forward Lawrence Roberts sat out one game last season after he worked out for Portland and repaid the expenses once he returned to his hometown of Houston.

Morris started all season at center for Kentucky and averaged 8.8 points and 4.2 rebounds -- below expectations for a McDonald's All-American who considered turning pro right out of high school. But given Morris' potential, his return boosts the Wildcats' status as national title contenders in '06.

He's joined by fellow returning starters Rajon Rondo and Patrick Sparks and a deep cast of reserves from a team that reached the 2005 regional finals and lost a trip to the Final Four in double overtime to Michigan State.