In the world outside of college basketball's privileged class -- you know, the major conferences -- reaching consecutive NCAA Tournaments is a significant accomplishment.

It means either a school has won back-to-back conference tournaments, which is always difficult, or a team has put together a very strong résumé and secured an at-large berth. 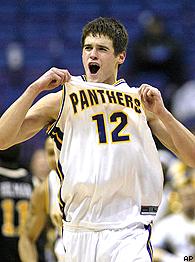 If you take the big six -- ACC, Big East, Big Ten, Big 12, Pac-10 and SEC -- and Conference USA out of the equation, only nine schools made back-to-back NCAA appearances in 2004 and 2005, and it's a pretty good list: Gonzaga, Southern Illinois, UTEP, Nevada, Vermont, Pacific, Central Florida, Louisiana-Lafayette and ... Northern Iowa?

UNI coach Greg McDermott, entering his fifth season at the helm of the Panthers, is still a little surprised his team has reached consecutive NCAA Tournaments.

"Sometimes it's hard for me to imagine," McDermott said. "Two years ago, our goal was to not play in the play-in game in the conference tournament. Everything just kind of fell into place, and we played well going into the conference tournament and then beat [Southwest Missouri State] in the championship game in overtime. It's hard for me to imagine how far we've come and how fast it's happened."

It's a little understandable why McDermott is somewhat surprised. When he arrived at Northern Iowa, the Panthers had experienced four consecutive losing seasons and had finished in the top half of the conference standings just twice in 10 years.

In the past two seasons, though, UNI is 42-21 overall and has recorded back-to-back 20-win seasons for the first time as a Division I school.

Now, two years after simply trying to avoid a lowly Friday game in St. Louis, Northern Iowa looks like a team that will get to three consecutive NCAAs. With all five starters returning from last season, the Panthers very well might be the favorite in the always good, always balanced MVC.

"If my college career ended now, I would say it was a success," said UNI guard Ben Jacobson, the Valley's leading scorer at 17.9 points per game last season. "But I still have a lot of goals I want to accomplish. I want to get back to the NCAA Tournament and win some games and go deep. I want to win the [regular-season] conference title. We haven't done that."

McDermott would like to see that, as well. After finishing tied for third in the regular-season MVC standings before losing in the quarterfinals of the conference tournament, Northern Iowa had to sit for more than a week, wondering whether it would get an at-large berth. Avoiding that uncertainty wouldn't be a bad thing, either.

"We haven't been in the position where we've been playing for the [regular-season] conference championship," McDermott said. "With the reputation of the Missouri Valley, if you're battling for the title, the postseason will take care of itself."

If that happens -- and the Panthers can spend Selection Sunday wondering whom they'll play in the NCAA Tournament, not whether they'll be playing -- Jacobson probably will be much of the reason.

The first Northern Iowa player to be named to the Wooden Award's preseason watch list, Jacobson is a gamer. If you saw him out of his basketball uniform, you might not look twice. Even when Jacobson's in uniform, few people think he's as athletic as he is.

Regardless, Jacobson can simply score. A year ago, Jacobson dropped 27 on Iowa State, scored 25 at Iowa, dropped 31 in a loss at Creighton and made the game-winning jumper in a late-season victory at Wichita State, which the Panthers needed if they wanted to have any chance of reaching the NCAAs.

In the tournament, UNI gave Wisconsin all it wanted in Round 1 before losing by five points.

"They're very well-schooled; they don't get rattled much; and they're very tough," said Wisconsin-Milwaukee coach Rob Jeter, who was an assistant at Wisconsin. "It was really evident that they had a plan. I was really impressed with Jacobson. He took the big shots, and he made the tough shots."

This summer, Jacobson led all scorers on the NIT All-Star Tour. A native of Sioux City, Iowa, Jacobson averaged 16.7 points per game during the seven-game tour of England and Ireland.

Northern Iowa's offense pretty much is patterned after Jacobson's game. The Panthers play to their strengths; they don't try to do what they can't; and they don't make mistakes. Last season, UNI was second in the Valley in scoring (72.7 ppg) and first in field-goal percentage (48 percent), and it turned the ball over fewer times than any other team in the league.

UNI's success isn't completely about Jacobson, however. Erik Crawford is a hard-nosed defender who constantly makes the right play. Eric Coleman, an undersized big man, was the league's freshman of the year. And forward Grant Stout was voted by the league's beat writers to the Valley most-improved team.

Even with all the pieces returning, McDermott knows the Panthers have to be more complete if they want to be as good as they can be.

"Our next step is to be a better road team," McDermott said. "This past season, we won at [Southwest Missouri State] and Wichita [State]. Hopefully we can build on that."

If that happens, NCAA appearance No. 3 won't be that tough to achieve.

Summer indicators
Good signs: The Missouri Valley certainly looks in position to continue to be a multibid league for the NCAAs, because there certainly isn't going to be a drop-off this season -- a year removed from the Valley getting in Northern Iowa, Southern Illinois and Creighton.

Six of the league's top 10 scorers return, as do six of the nine best rebounders. Creighton returns all but two players, including guard Nate Funk. Missouri State (don't call the Bears "Southwest Missouri State" or "SMS" any longer) returns eight of its top 10 players.

Even though Wichita State and Southern Illinois lost significant pieces -- the Salukis lost league MVP Darren Brooks -- both have some reserves who should be able to contribute. The fact that the league's teams do a better job than most of avoiding RPI killers in nonconference play doesn't hurt, either.

Given all that, it certainly wouldn't be out of the realm of possibility for the MVC to get three teams in the NCAAs for a second consecutive season.

Red flag: Things were going to be difficult this season for Illinois State's Porter Moser, as the Redbirds lost three starters. In May, things got worse.

That's when Lorenzo Gordon, last season's Valley newcomer of the year, was punted from the school for academic reasons. All Gordon did a year ago was lead the Redbirds in scoring (16.3 ppg) and rebounding (6.5 rpg). Now wing Neil Plank is the leading returning scorer for Illinois State -- at 7.1 ppg last season.

Worth watching: Bradley. The Braves might be both the most interesting and most dangerous team in the Valley.

A year ago, Bradley started fast but faded, finishing the season 13-15 overall and 6-12 in conference play.

Why could things be different this season? Jim Les' team, which didn't have a senior on its roster last season, returns 95.9 percent of its scoring and 93.1 percent of its rebounding. The Braves also have two of the most difficult players in the league to match up with defensively -- Marcellus Sommerville and Patrick O'Bryant.

Sommerville, a two-time first-team All-Valley performer who averaged 17.5 points and 7.5 rebounds per game last season, is a 6-foot-7 forward who can play inside and out. Put a little guy on him and Sommerville will post him up. Put a big guy on him and he'll go outside and put the ball on the floor. He's trying to be the first Bradley player since Hersey Hawkins to be a first-team player in three consecutive seasons.

O'Bryant is a rarity in the Missouri Valley, a true 7-footer. He needs to gain strength and weight, but he has a nice jump hook and can make the 12- to 15-foot jumper. After averaging just more than 10 points per game as a freshman and leading the league in blocked shots, O'Bryant might be the best long-term NBA prospect in the Valley.

Bracketology
Our resident Bracketologist, Joe Lunardi, seems to agree that Northern Iowa will end the season at the Valley's peak.

In his early look at the 2006 NCAA Tournament, Joe has the Panthers and Creighton as the MVC's entrants.

Jeff Shelman of the Minneapolis Star Tribune (www.startribune.com) is a regular contributor to ESPN.com.