Quin Snyder is out as Missouri basketball coach, one day after saying he planned to finish what had become a disappointing season. 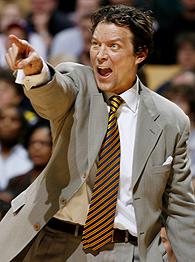 Associate head coach Melvin Watkins is expected to coach Missouri (10-11) for the remainder of the season, starting with a home game Sunday against Kansas State.

The school released a two-sentence statement saying only that Watkins would serve as "acting head coach" against the Wildcats. Snyder's resignation is expected to become official sometime Saturday after Snyder's lawyers and the school reach a settlement.

"I know there are a lot of questions people have, but that's the level of detail we can get into," said Chad Moller, the school's sports information director.

A source close to the situation at Missouri told ESPN.com that the Tigers have already assembled a list of top candidates that the school wants to pursue. Missouri is expected to ask permission, once the season ends, to speak with UAB coach Mike Anderson and Northern Iowa's Greg McDermott and will make inquiries into possibly talking with Creighton's Dana Altman and West Virginia's John Beilein. ESPN analyst and former Utah head coach Rick Majerus will also potentially be on the list.

After a 10-5 start that culminated with an overtime win against rival Kansas, the Tigers lost six straight. All six of those losses have been by double digits, including a 26-point loss to Baylor on Tuesday. The Bears are in last place in the league and had one win going into that game.

Snyder spoke to his team before practice Friday and said he was leaving.

"What he told us is, it's an opportunity to get back to playing basketball. All the speculation was a heavy burden," Reiter said.

Snyder leaves after a seven-year stint, compiling a 126-91 record. He had two years remaining on a contract that paid him a base salary of $190,000. His total compensation package at Missouri, including incentives, was worth more than $1 million a season.

Snyder, who played on three Final Four teams at Duke and was an assistant to coach Mike Krzyzewski, was hired to replace the retiring Norm Stewart and take Missouri to national prominence. He helped the Tigers earn NCAA bids in his first four seasons,
including an appearance in the final eight in 2002.

But the Tigers were only 42-42 since then, and attendance has dropped despite a new arena that opened last season.

Snyder said before practice Thursday that he hadn't been asked to resign and didn't plan to.

"I'm coaching my team, so I'm going to keep doing that until someone tells me not to, keep working as hard as I can," Snyder said at the time.

The program has also been marred by scandal. In 2004, it was placed on NCAA probation for three years following questionable activities surrounding former point guard Ricky Clemons. The school avoided a ban from postseason play but was prohibited from off-campus recruiting for one year.

Watkins is in his second season with Missouri after six seasons as head coach at Texas A&M. Watkins also coached Charlotte to a 42-20 record from 1996-98, during which he had two NCAA Tournament appearances.

His son, Marcus, is also a reserve guard for the Tigers.

Watkins was scheduled to address the change at a news conference, but Missouri scrapped those plans. Moller read a brief statement and declined to answer questions.

A hastily rescheduled evening practice with Watkins in charge was also canceled.

Missouri's first order of business will likely include persuading frustrated players to stick it out. Junior guard Thomas Gardner, who leads Missouri and the Big 12 in scoring with 20.2 points a game, said Thursday he would consider leaving school early for the NBA if Snyder was no longer the coach.

Sophomore point guard Jason Horton has also said he would play only for Snyder at Missouri.

Charlotte Bobcats guard Kareem Rush, who played for Snyder at Missouri, was surprised when he learned the news.

"Coach Q was a great coach when I was there, but he had a rocky last couple of years," Rush said. "It's unfortunate. He's a great coach, and I know he's going to bounce back some other place. But it was probably time for him to leave. A lot of people wanted him out of there."