INDIANAPOLIS -- J.J. Redick, whose 3-point shooting led Duke
to a No. 1 ranking for most of the season, was selected the
national player of the year by The Associated Press on Friday.
The senior guard was second in the nation in scoring this
season, capping his career as the Atlantic Coast Conference's
all-time leading scorer and Division I's most prolific 3-point
shooter. 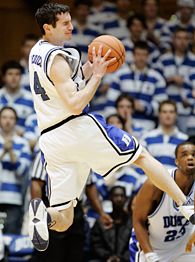 Redick is the record sixth Duke player to win the award, with
five winners coming since 1992. The award was first presented in
1961.
A repeat first-team All-America, Redick received 43 votes from
the 72-member national media panel that selects the weekly Top 25.
Adam Morrison of Gonzaga, who beat Redick in a season-long,
bi-coastal scoring race, got the other 29 votes in the balloting
conducted before the NCAA Tournament.
"There are so many great players in this country, specifically
Adam Morrison and my teammate Shelden Williams, that it's a great
honor to win this award," Redick said.
Redick averaged 26.8 points this season, shooting 47 percent
from the field, 42 percent from 3-point range and 85 percent from
the free throw line. A tireless worker on offense and an extremely
intense player, he averaged 37.1 minutes for Duke, which finished
the season with a 32-4 record.
The Blue Devils were ranked No. 1 for all but five weeks this
season and were on top of the final poll for the fifth time since
1999.
He finished his career with 2,769 points and the record 457
3-pointers.
The other Duke players to be selected national player of the
year were Art Heyman (1963), Christian Laettner (1992), Elton Brand
(1999), Shane Battier (2001) and Jason Williams (2002).
"It's an honor to be one of the Duke players to win this
award," Redick said. "Looking at the list, I know I'm the sixth
man on that team."
UCLA is second with five awards -- Lew Alcindor (1967, 1969),
Bill Walton (1972, 1973) and Marques Johnson (1977).
Andrew Bogut of Utah won the award last season.