The mascot may be similar, but the surroundings will be different for Todd Bozeman, who returned to college basketball this week after an eight-year ban for NCAA violations at Cal.

Morgan State introduced the one-time sideline prodigy as its new coach on Thursday. 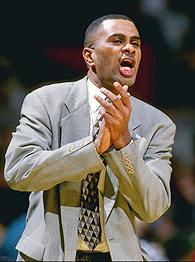 Bozeman, then 29, became the youngest head coach to reach the NCAA Sweet Sixteen with the Golden Bears, but just as quickly he was barred from the college ranks because of recruiting violations.

"Since the 'show cause' penalty that was imposed upon Mr. Bozeman as a result of this case expired as of June 1, 2005, and there are no procedural impediments to his seeking employment at an NCAA institution, Morgan State University determined that Coach Bozeman was the best applicant, candidate and selection for its head men's basketball coaching position," Kerr said.

The ban came after Bozeman admitted he had paid a recruit's family $30,000. Any team interested in hiring him before the ban ended would have had to present reasons to the NCAA.

"It was tough because I felt like I let a lot of people down that supported me," Bozeman said. "Sometimes in your youth you don't understand that. You don't realize that you represent so many more people. At the time I was probably the first young black coach to really be on the scene like that. I took that personally and I also took it personally that I affected the coaches on my staff, their families, any alumni and everyone."

In the interim, Bozeman did NBA scouting, coached in summer leagues and internationally, and worked camps and clinics on four continents.

Thursday, he embraced the opportunity to return to college coaching with a new team, also called the Bears.

"I always had a dream and a goal of taking a historically black college and making it a national power and making it a special basketball program," Bozeman said. "So now I have that opportunity and I am going to do my best to fulfill the dream."