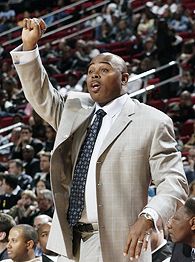 A contract still hasn't been agreed to yet.

So, there is still a chance that there could be a hurdle to clear before Lowe is named the head coach. But that would seem unlikely after NC State announced it was having a 5:30 p.m. ET news conference Saturday to announce its new men's basketball coach.

North Carolina State offered Lowe, a point guard on NC State's 1983 national championship team under the late Jim Valvano, the job after the Pistons eliminated the Milwaukee Bucks 4-1 on Wednesday night in the first round of the NBA playoffs.

NC State athletic director Lee Fowler spent the last month traversing the country trying to hire a big-name coach. He offered the job to Texas' Rick Barnes and Memphis' John Calipari before being rebuffed by both. Calipari went as far as to take his staff to the Raleigh campus to tour the facilities while trying to be incognito and under the cover of darkness. ESPN analyst and former UCLA coach Steve Lavin was also reportedly offered the job, as well, but turned it down.

Throughout the past week, multiple sources told ESPN.com that Fowler wanted someone with N.C. State ties. Fowler didn't use a search committee but leaned on Fred Barakat, an associate commissioner in the ACC.

Lowe told the Pistons he would stay with them until the end of the NBA playoffs. He would have to hire a staff that would run the program while he finishes his duties with the Pistons.

Lowe is also still finalizing his degree. The Charlotte Observer and Raleigh News and Observer reported that Lowe will finish the last nine hours of his business administration degree at Saint Paul's College in Lawrenceville, Va., (through online) 23 years after leaving NC State.

Andy Katz is a senior writer for ESPN.com