COLUMBIA, S.C. -- Bobby Cremins is returning to college
basketball as coach of the College of Charleston. He has not
coached since retiring from Georgia Tech six years ago. 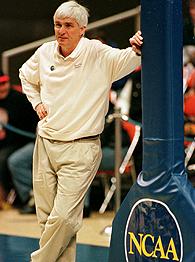 "I just really missed the game and I'm thrilled to get a second
chance here," Cremins told The Associated Press on Sunday.

Cremins, who said he agreed to a six-year contract, met with the
school's search committee Friday. He'll be formally introduced as
the Cougars' coach on Monday.

Cremins spent 19 seasons with the Yellow Jackets, winning three
Atlantic Coast Conference titles and reaching the Final Four in
1990. He has worked as a TV analyst on college basketball games
since then.

Cremins takes over for Tom Herrion, who last month was bought
out of the remaining four seasons of his contract with the Cougars
for $787,000.

Cremins is known nationally for luring such stars as Kenny
Anderson, John Salley and Stephon Marbury to Georgia Tech. But in
South Carolina he's best known for accepting the job at his alma
mater, South Carolina, in 1993 and then going back to the Yellow
Jackets three days later.

This time, Cremins was the beneficiary of second thoughts.

Charleston appeared to have filled its vacancy when Winthrop
coach Gregg Marshall, a former Cougars assistant, agreed to the
job. But Marshall felt anxious about the move, and the next day
decided to remain with the Eagles.

The Cougars were 17-11 this past season, the third straight year
under Herrion that their victory total fell.

"We've got some work to do, but we're excited to do it," said
Cremins, who'll turn 59 on Tuesday.