SCOTTSDALE, Ariz. -- Arizona State fired football coach Dirk
Koetter on Sunday after he led his team to a bowl the last three
seasons but rarely beat the best in the Pac-10. 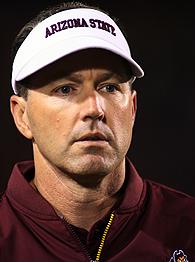 "He has put us on a wonderful stage," Love said. "He has done
some wonderful work. But we're looking for a higher platform."

Koetter went 40-33 in six seasons at ASU. Love said the
search for a successor would start immediately, but she provided
few specifics about possible candidates.

Love said Koetter
agreed to stay on and coach the team in a bowl game. "They deserve that," Love said

"It would be foolish not to finish off what we started," said Koetter, according to a story in the Arizona Republic. "I never lost the itch to coach, and I'm sure I'll coach again."

The Sun Devils completed a 7-5 regular season with a 28-14
victory over rival Arizona in Tucson on Saturday, clinching their
third consecutive postseason berth.

But Love said losses to Pac-10 powers such as California and USC
played a role in her decision.

"Where we struggled in certain big games this year became
problematic, and therefore led me to making the decision that I
have made," she said.

Love said she fired Koetter on Sunday morning by phone. Koetter
broke the news to the team before the banquet.

"Everybody has regrets," he said at a news conference. "You
learn things along the way."

Koetter said he respected Love's decision, but he showed a
feisty side when asked if he was surprised to be fired.

"When you meet that new coach, just make sure the first thing
you say to him in that awkward moment isn't, 'Just beat U of A.
That's all you have to do to keep everybody happy,"' Koetter said.
"We know that's not true."

Koetter went 4-2 against the Wildcats.

Players were emotional when Koetter broke the news to them.

"It's tragic, man," senior cornerback Keno Walter-White said.
"We have a great coach in Coach Koetter. It's a real
disappointment. It's tough being a Sun Devil right now."

Koetter's dismissal comes less than a year after Love gave him a
contract extension through the 2009 season. The deal called for
Koetter to be paid a total of $2.85 million from 2007-09.

It's the second time in seven years the school has fired a coach
with a winning record after he earned a bowl berth. Koetter
succeeded Bruce Snyder, who went 58-47 in nine seasons and was
dismissed despite getting to the Aloha Bowl in 2000.

Koetter came to ASU from Boise State, where he went 26-10 from
1998-2000 and earned a reputation as an offensive wizard.

"How ironic is it that the day I'm getting fired at Arizona
State, Boise State's going to the BCS?" Koetter said. "It's
pretty crazy how that all works out."

Koetter went 4-7 in his first season at ASU, finishing ninth in
the Pac-10. But he seemed to have turned the program around in
2002, posting an 8-4 record and earning a Holiday Bowl berth with a
third-place conference finish.

But a pattern had begun. ASU won five games in 2003, nine in
2004 and seven in 2005. That inconsistency, coupled with Koetter's
2-19 record against ranked teams, led to mounting criticism from
Sun Devils fans.

This season brought high expectations, with ASU ranked 24th in
the AP preseason Top 25. But Koetter came under intense scrutiny at
the end of fall camp when he anointed senior Sam Keller his
starting quarterback, then changed his mind and gave the job to
sophomore Rudy Carpenter less than two days later.

Keller soon transferred to Nebraska, where he is sitting out
this season under NCAA rules.

The episode seemed to become a footnote as the Sun Devils won
their first three games against Northern Arizona, Nevada and
Colorado. But it loomed large when the offense struggled and the
Sun Devils opened Pac-10 play with losses to California, Oregon and
Southern California.

Koetter's offense is typically among the most productive in the
nation. But Carpenter, who led the nation in passing efficiency a
year ago, struggled behind an injury-riddled line and had little
help from an inexperienced receiving corps.

Information from The Associated Press is included in this report