Miami coach Frank Haith got the phone call early Saturday morning that his nephew, the relative he always thought looked just like him, had been shot and killed in New York. 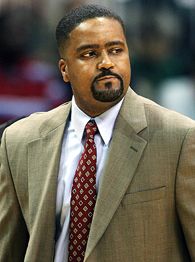 He didn't tell his staff, his players or his administration because he knew he had to coach the Hurricanes against Lafayette that day -- the day his nephew, Sean Bell, was to be married to Nicole Paultre in Queens.

But once Haith heard more details and knew that the investigation of whether undercover officers used excessive force outside Bell's bachelor party at the Kalua Cabaret strip club in Queens was going to be national news, he had to let everyone know of his relationship with Bell.

"He was a good kid," Haith said Tuesday morning by phone as he sat in his hotel room in Chicago, awaiting the Hurricanes' game against Northwestern in the ACC/Big Ten Challenge on Tuesday night. "It's a sad, sad story.

"We're all very devastated. He was just about to start a new chapter in his life. He has two kids. He was getting married. We're all truly saddened by what happened," he said.

Bell is the son of Haith's brother, William. Haith said he has his father's last name, while William has his mother's.

Haith plans on going to New York for the funeral Friday. But he will be back to coach the Hurricanes in Sunday's ACC opener against Georgia Tech.

Haith said he wasn't planning on going to Bell's wedding Saturday, because of the Hurricanes' schedule. He said he recently joked with his nephew about scheduling the wedding at this time of the year.

"He just told me it was time," Haith said.

Haith said he can't talk further about how Bell died because of the investigation and asked that members of the media respect the family's privacy.

New York mayor Michael Bloomberg on Monday said he was "deeply disturbed" by what occurred but didn't want to prejudge the district attorney's case or anything the grand jury would do from this point forward. Bloomberg said he met with NYPD commissioner Raymond Kelly as well as community leaders to go over how the shooting occurred. The Rev. Al Sharpton has also spoken out over the high-profile case.

Five undercover officers fired their weapons 50 times or more at Bell and his friends as they left the strip club in their car, allegedly after the car struck an officer and an unmarked police van.

Bell was the only one killed in the shooting. Friends Joseph Guzman and Trent Benefield were also shot but are expected to survive.