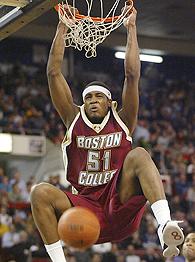 Multiple sources confirmed that the pair of Eagles, who have each been suspended twice before during their careers for a violation of team rules, were told earlier Wednesday. The team was being informed Wednesday night. The school released word of the dismissals just before 7 p.m. (ET) without a comment from BC head coach Al Skinner or athletic director Gene DeFilippo. Boston College said it would not release further information on the matter.

Williams was suspended once for marijuana possession, while McLain had been suspended for his involvement in a counterfeiting scam.

Williams was the early favorite for the national defensive player of the year after blocking 75 shots in 15 games.

The Eagles entered Wednesday night atop the ACC with a 5-0 record and were 13-4 overall.

Williams scored 10 points, grabbed six boards, made all four free throws and blocked three shots in the Eagles' 82-63 victory over Miami at Conte Forum on Tuesday. McLain, who had played in only one previous game (four minutes against Kansas) due to a nine-game suspension and then a sprained ankle, played two minutes and had one rebound against the Hurricanes.

The 6-foot-10 Williams was averaging 12.1 points and 7.0 rebounds per game for the Eagles. Williams was suspended for the first two games this season for a violation of team rules. But once he became eligible Williams went on a shot-blocking tear, swatting 12 shots in his first game, a loss to Providence. Williams blocked 13 shots in a loss to Duquesne and had six games of five or more blocks and seven games of three rejections.

Williams had also developed an offensive game of late, scoring 16 or more points in seven of 15 games.

Williams was suspended for the fall semester last year due to the marijuana charge and wasn't allowed to attend the school. As a result he went home to Houston and took classes. He spent time with former NBA player John Lucas, who has a history of helping players get their lives and games straightened out, especially anyone who has had a substance abuse issue.

This latest hit to Williams could damage his NBA draft position. Now that he's off the team it would seem likely that he would declare for the draft.

The news comes at a crushing time for the Eagles, on the eve of playing at Clemson Saturday.

Boston College was looking like a team that had righted itself after some puzzling losses to Vermont at home (without Williams), to Providence (after Williams returned) and to Duquesne (without Jared Dudley). The other loss was at Kansas.

Williams had become the most feared shot blocker in the ACC and one of the main reasons the Eagles were discussed as a possible ACC title contender. Dudley has talked about being able to gamble more with Williams on the backline.

The bright spot for the Eagles has been the recent play of guards Sean Marshall and Tyrese Rice. Marshall has scored 20 or more points in four of the last five games. Rice has scored 16 or more in six of the past seven games.

The major problem for the Eagles will be up front where they are maybe too thin to handle the rigors of the ACC. Junior center John Oates (4.9 ppg, 4.1 rpg) is usually more of a face-the-basket player while freshman Shamari Spears (8.4 ppg, 6.3 rpg) has been inconsistent and is only 6-6. Then there is 6-11 junior Tyrelle Blair, who has been limited to 10 minutes and only 1.8 points and 1.8 rebounds per game.

This will also put incredible pressure on Dudley, who is playing with a stress fracture in his left foot. Dudley is averaging 19.1 points and 9.1 rebounds but will have to do even more by himself.