TEAM OF THE WEEK: MARYLAND

Now this is more like it. Maryland finally is playing like the team we all saw in New York City in November.

The Terps' win over North Carolina on Sunday night was the kind of effort at both ends of the court that Maryland has the potential to produce. Now the Terps have won five in a row, including knocking off Duke and winning at NC State and Clemson. This past week started with an 18-point win over Florida State.

The Terps' athleticism, their ability to play different speeds, and the fact that they finally are playing with purpose and pride make them a dangerous team heading into March.

Maryland is a classic case of a team that is playing well at the right time. The Terps appeared to be in danger of sliding out of the Dance a month ago, but they have the talent to make it to the Elite Eight.

PLAYER OF THE WEEK: DREW NEITZEL 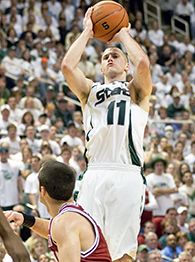 Matthew Mitchell/WireImage.com
Neitzel has been on fire from behind the arc.

Big Game Drew came up huge this week yet again, averaging 22.5 points a game in Michigan State's two key wins at home over Wisconsin and Indiana.

Neitzel scored 28 on the Badgers, going 10-of-17 from the field (six of his 10 field goals were 3s). He helped swat Wisconsin, which checked in at No. 1 in the AP poll, all the way back to the isthmus between Lake Mendota and Menona in Madtown.

He got off to a slow start against IU, scoring just two points in the first half, but had 15 in the second, making three 3s to lead the comeback. He "only" clipped in at 55.6 percent from the field for the week, including 52.9 percent on 3s.

Neitzel may just be the most important guard for any team entering the NCAA Tournament. Oh yeah, he essentially has single-handedly put the Spartans into the NCAAs.

Wisconsin lost games at Michigan State and at Ohio State this week, and it was still a good week for the program. To have two of the Big Ten's heavyweights storm the court on you, and both of the opposing coaches get teary-eyed over the wins, means that Wisconsin basketball is truly respected.

When Wisconsin reached No. 1 in the AP poll, former athletic director Pat Richter played the respect card, as if the national spotlight was being denied the Badgers by some vast roundball conspiracy. I never have a problem with the respect card, but now it doesn't have to be played anymore. Actions speak louder than words, and the actions of opponents spoke volumes.

The major downside in the Ohio State loss was the injury to Wisconsin big man Brian Butch.In that game, the absence of Butch meant that Greg Oden could park himself in the lane. Wisconsin's Jason Chappell is not a shooter or scorer, and Butch would have made a big difference in the way Wisconsin played, and how big the Badgers could have played with him in there.

If Butch is out for the season, that is an awfully bad break for a really good basketball team. It was a tough adjustment to make on the fly, but with Oden guarding Chappell and staying in the lane, Chappell became a free screener and should have set more screens (on and off the ball), because Oden was not there to help. That would have freed up more opportunities for teammates.

Thanks to the magic of ESPN, the nation recently has discovered Acie Law IV and now can deduce why Texas A&M has as good an opportunity as anyone in the top 10 to get to the Final Four.

Don't be surprised if Law is the first senior taken in the NBA draft and goes as high as the top 15 overall. I'm always amused when the draftniks have a player moving "up the draft board." It usually means that they weren't paying attention for a while. While Law has improved as much as any player in the Big 12 over four years, he is a big reason why Texas A&M got to the NCAAs a year ago and why this season has been a magical one for the Aggies.

Law is a more complete version of former UConn point guard Marcus Williams, who went 22nd in last year's draft to the New Jersey Nets. It will be hard for any voter to leave him off the All-America first team.

Can someone really explain to me why it is that Ohio State is No. 1? Seriously, I know that they just survived a Pier 6 brawl versus Wisconsin, but that was their second win over a ranked opponent this year, and they did it after Brian Butch left the game with what looked like a separated elbow (Butch has an MRI scheduled for Monday night).

If not for Wisconsin's penchant for Gottlieb-like foul shooting (the Badgers ranked 192nd in the country entering the game and went 3-6 from the line) and the obvious home-court advantage, how impressed should we all be with OSU?

Now, I am not claiming the Buckeyes are a complete fraud, but I have been rather unimpressed with Wisconsin -- and I turned off the TV thinking that the Badgers were the better team. Maybe that is why the fans stormed the court.

Regardless, the mere fact that Joe Lunardi has anointed OSU as a 1-seed and the voters will place the Buckeyes at No. 1 again leaves me wondering just why we are supposed to pay attention to overall profiles. UCLA has far more impressive wins, and one of its losses was when Darren Collison was out.

The Big Ten's top four teams have a combined home record of 69-1, so to reward the Buckeyes for home victories seems kind of odd. It is my belief that the rematch of Wisconsin and Ohio State will provide the 1-seed from the Big Ten, and I still question the validity of Ohio State's current ranking.

UCLA is set: The Bruins have the top backcourt in the country in Arron Afflalo and Darren Collison, might be the toughest team in the nation, and look like the No. 1 overall seed in the NCAAs. There is no more of a lock than UCLA in Sacramento (and feeding into the West regional in San Jose).

Auburn on the rise: Coach Jeff Lebo has the Tigers going in the right direction. Sure, they are 6-8 in the SEC, but that ties them with Alabama in the standings, and Auburn swept Bama this season.

SEC West in trouble: Meanwhile, don't be surprised if no one from the SEC West gets an NCAA bid. It's highly possible.

Kansas on a roll: Is there another team that could knock one of the perceived locks from a No. 1 seed other than KU? The Jayhawks are playing as well as UCLA right now and continue to have different players lead them in key spots.

Horizon still valid for two: Wright State's loss to Youngstown State ruined any at-large chances for the Raiders, but Butler's subsequent loss to Loyola-Chicago didn't damage its at-large hopes. If Butler doesn't win the Horizon League tourney, the league will get two teams in.

Memphis is cruising: Conference USA better hold on to the Tigers. If Memphis leaves, this league loses its only marquee team. Memphis continues to plow through the competition on the way toward another high seed.

BC saves face: The win over Clemson stopped the bleeding for the Eagles. They were risking slipping out of the Dance, but they won and now are tied in the win column with North Carolina, Virginia and Virginia Tech for the top spot in the ACC.

Gonzaga steadying: The Zags desperately needed to beat San Francisco to stay in the race for an at-large berth, and did in OT. Gonzaga is figuring out ways to win without Josh Heytvelt. Will it be enough without a WCC title? Not sure, but at least the Zags are winning games they have to win.

NIT will have tough calls: Connecticut has six Big East wins with two games left: vs. Villanova and at Georgetown, along with a tough Big East tourney first-round game. Please tell me why the Huskies are a lock for the now-32-team field with what looks to be a crowded pool of candidates?

Southern Illinois scorching upward: The Salukis don't have the marquee nonconference games, yet they should get a high seed -- possibly even a No. 3. If that occurs, SIU could be in an advantageous position -- locationally and draw-wise, if the right breaks happen -- all the way to the Elite Eight.

Air Force heading south: One MWC coach told me that the Falcons are getting predictable and it's showing in the league. TCU -- yes, TCU -- beat Air Force over the weekend.

Texas is soaring: The Longhorns were considered a bubble team a month ago, but Texas is on fire of late, is 11-3 in the Big 12 and is looking like a team that, behind player-of-the-year favorite Kevin Durant, could make an Elite Eight run.

Virginia Tech's No. 1? If the season ended today, the Hokies probably would be the No. 1 seed in the ACC tournament. Think about that for a second...

MON/Georgetown at Syracuse
The Orange simply must get another win this week.

TUE/West Virginia at Pittsburgh
WVU must pick up another scalp somewhere, and this would be the best chance.