The legendary Lady Vols coach came through on a promise to make
a special appearance during the men's game against No. 5 Florida.

She was paying back men's coach Bruce Pearl for painting his
upper body orange and cheering at a Lady Vols game last month. 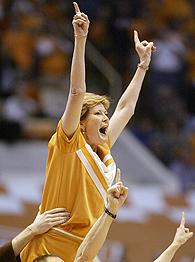 Summitt came out during the first media timeout of the game
shrouded by other cheerleaders and started singing "Rocky Top"
while holding a microphone and wearing an orange and white feathery
hat and cheerleader uniform.

At the end of the song, she put her hat on ESPN commentator Dick
Vitale. Then she helped lead cheers with the cheerleaders and her
assistant coaches and finished by being the top of a short pyramid
formed by assistants Holly Warlick and Dean Lockwood.

Summitt, 54, said Monday the appearance would seem "a lot out
of character," and she was right.

Summitt is known for working players hard in practice and her
icy stare on the sidelines during games. She's also the winningest
coach in NCAA basketball history -- men or women -- with 940
victories.

"My cheerleading days are over. I did this for Bruce Pearl and
his basketball team and all the Vols fans," Summitt told ESPN
after her appearance.

"This was fun. I'm glad my staff joined in."

Summitt was a cheerleader in seventh and eighth grade.

Manning received a standing ovation when he was introduced in
the first half.