New Mexico and Iowa coach Steve Alford agreed to the final details of a contract and Alford was introduced as the Lobos' new coach at a news conference Friday. 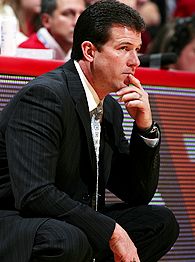 Alford told his Iowa players during a team meeting Thursday that he was leaving to take over the New Mexico program.

"Things came up, and this is the decision he had to make," senior guard Mike Henderson said. "He's going to New Mexico."

Sources said Alford was thrilled with the commitment from recently hired New Mexico athletic director Paul Krebs and impressed by the university's decision to upgrade the famed Pit, which, according to Krebs, will receive $12 million from state government for renovation. There also is hope that the figure could rise to $20 million. The Lobos opened a new practice facility last year.

New Mexico targeted Alford within the past two weeks while also waiting to talk to Winthrop coach Gregg Marshall, whose team was playing in the NCAA Tournament. But according to multiple sources, New Mexico told Marshall on Tuesday that it would be committing to another candidate.

The courtship of Alford started in large part because of new university president David Schmidly's previous employment at Texas Tech. The Red Raiders are coached by Bob Knight, who coached Alford at Indiana in the 1980s.

According to sources, the Lobos consider it a major coup to land a Big Ten coach to replace the outgoing Ritchie McKay. Alford won two Big Ten tournament titles and took Iowa to the NCAA Tournament three times -- in 2001, 2005 and 2006.

Sources close to Alford said he was looking for a new challenge following some stressful seasons in Iowa City. The Hawkeyes have had some issues off the court, notably Pierre Pierce's legal troubles during Alford's tenure. Once the Hawkeyes' leading scorer, Pierce was charged with assault in 2002 and then in 2005 sentenced to prison on an array of charges involving an incident with a former girlfriend.

With football reigning as the most popular sport at Iowa, sources said Alford was looking for a school that is passionate about basketball first. Krebs has pledged to make the Lobos nationally prominent, bumping up the coach's salary more than $500,000 in an attempt to get it closer to Alford's nearly $1 million annual salary at Iowa.

Alford coached the Hawkeyes to a 17-14 record this season. They were 9-7 in the Big Ten, tied with NCAA-bound teams Illinois and Purdue for fourth place. The Hawkeyes also missed out on an NIT berth.

The Lobos reached the NCAA Tournament under McKay once, losing in the first round in 2005. The Lobos' NCAA history is brief. Dave Bliss took the Lobos to the tournament seven times between 1991 and 1999. Prior to Bliss' hiring, the Lobos made only three other tournament appearances in their history. Krebs would be banking on Alford bringing the Lobos back into contention for a bid on a regular basis.

Andy Katz is a senior writer at ESPN.com. Information from The Associated Press was used in this report.