SAN JOSE, Calif. -- Regardless of what happens in Saturday's West Regional final between No. 1 seed Kansas and No. 2 seed UCLA at HP Pavilion, Jayhawks forward Julian Wright knows one thing: he'll be back with the Jayhawks next season. 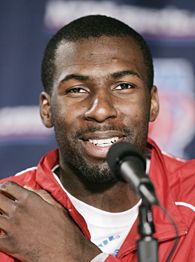 Wright, a 6-foot-9 sophomore, said he will return to Kansas for his junior season in 2007-08, even though he is considered a potential lottery pick in June's NBA draft if he forgoes his final two seasons of college eligibility.

"I made the decision before this season that I'm not thinking about [the NBA] at all," Wright said. "I'm coming back."

He scored 21 points and grabbed 10 rebounds in Kansas' 82-80 overtime upset of then-No. 2 Florida on Nov. 25, a game in which Wright dominated Gators forwards Al Horford and Joakim Noah, another pair of potential NBA lottery picks.

But Wright also has been plagued by inconsistency at times during his second college season. He scored 33 points and had 12 rebounds in a 92-74 win over Missouri on Feb. 10, then scored only four points with three turnovers in a 71-
62 victory over Kansas State nine days later.

"He's just a sophomore in college," Kansas coach Bill Self said of Wright. "He's a fabulous talent, and I've said that all along. When he's playing his best, his ceiling is higher than anyone else's. But he's not a natural scorer.
That's not what he wants to do. So sometimes he can kind of give the appearance of not impacting the game as much because he's not scoring points."

Wright said part of the reason he plans to stay at Kansas is he hopes to earn a bachelor's degree in communication studies in only three years. He hopes to graduate from Kansas by summer 2008. On the court, Wright said he probably won't reach his full potential for "another five years."

"The route to getting better is to stay in college," Wright said. "The NBA is more of a skills setting."