MANHATTAN, Kan. -- His pudgy face seemed sad as he leaned in front of a microphone Friday afternoon, 980 miles away, and talked about leaving the fine people at Kansas State. For a moment, Bob Huggins was struggling. He told the yarn of how he'd sit on his grandfather's lap as a kid listening to West Virginia basketball games, then shoot basketballs and come in black from the coal dust.

It was touching, it was heartfelt, and it gave a glimpse of a man that they barely knew called Huggy.

At Kansas State, it was tuned out.

A cold, bitter wind blew through Manhattan at precisely 1 o'clock Friday, the same time Huggins was being introduced as West Virginia's new basketball coach. There were no tears, no well wishers, no fans glued to the big screens in the bar district called Aggieville near the K-State campus. They weren't waiting to watch Huggins' mug appear on a live Internet press conference.

Just 379 days ago, Huggins was the great new hope for Kansas State basketball. Now he is purple's enemy.

"We all feel betrayed," said Kansas State student Cole Clem, who this past season arrived at 11 a.m. for 7 o'clock games just to get a good seat. "It's like he started something but didn't finish it." 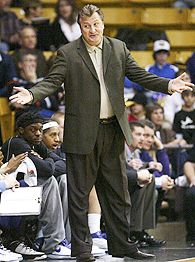 As Huggins officially changed jobs again, purple-clad fans sipped Boulevard beers, watched college baseball and quietly moved on. Kris Smith, the general manager at Kite's Bar and Grill, said Thursday night was rowdy. Some angry fans at a bar down the street tried to get screwdrivers and yank a picture of Huggins off the wall.

Kansas State has had its share of misery, especially on the basketball court. The Wildcats hadn't been to the NCAA tournament since 1997. Before Huggins arrived, they hadn't had a winning conference season since the inception of the Big 12. But things were going to change with Huggins, and the winter was filled with a rare buzz of a team fighting for the NCAA tournament.

He implored K-State fans to never settle for second-best and nagged them to show up in the stands. He brought his attitude and black uniforms from Cincinnati. Season-ticket sales went from 6,500 to 13,000. He landed some of the nation's top recruits. And then he was gone, off to the place he called home.

"I was kind of struggling," Huggins said in Morgantown. "(But) as soon as I put my feet on the ground in this great state, I've been walking on air ever since."

At Ballard's Sporting Goods store in Manhattan, they were struggling to keep some new T-shirts in stock. Steve Lowman made them up Thursday afternoon, when it looked as if Huggins was gone. The shirts have the word "Huggieville" crossed out and replaced with "traitor."

Lowman had sold hundreds of them by Friday afternoon, and still was moving the old pro-Huggins garb.

"I'm surprised we're selling any of those," Lowman said.

He said a guy named Bob J. Huggins from Canada called wanting 12 T-shirts -- six pre-Huggy and six post-Huggy. Then there are those who just want a piece of history.

A short walk away at Varney's bookstore, Steven Doll wandered around in between classes, searching for remnants of the Huggins era.

Doll compared the Huggins jilt to finding out your girlfriend is cheating on you. It hurts, but for some reason you still care. Maybe that's why he was still looking for a Huggins shirt around 1:30, when West Virginia was in full grip-and-grin mode.

Maybe that's why it would be tough to wear one around town for a while.

While Smith poured beers at Kite's and Clem poured his heart out about his one-year love affair with Kansas State basketball, several men in power suits met on campus to discuss the fate of Wildcats basketball.

Less than 24 hours after word hit of Huggins' departure, athletics director Tim Weiser knew they had to move fast. Big-time recruits were watching -- including highly-touted prep star Michael Beasley. They wanted to salvage the last 379 days and try to keep the team intact.

Weiser and president Jon Wefald interviewed Wildcats assistants Frank Martin and Dalonte Hill. Within hours, Martin was named head coach and Hill associate head coach. By late afternoon, Martin and Hill were at the airport, rushing off to see Beasley at an all-star game in Memphis.

By mid-afternoon, the remnants of Huggins were disappearing. The name plate on his parking spot outside Bramlage Coliseum had been removed, and all that remained was a metal stump. According to one K-State official, everybody at Bramlage was too busy to watch Huggins' press conference. Huggins is expected to return at some point soon to clean out his office and say goodbye.

On a cold day in Manhattan, they said good riddance.

Elizabeth Merrill is a writer for ESPN.com. She can be reached at merrill2323@hotmail.com.