STILLWATER, Okla. -- Oklahoma State junior guard JamesOn Curry plans to enter the NBA draft but will not hire an agent, according to a report by The Oklahoman. 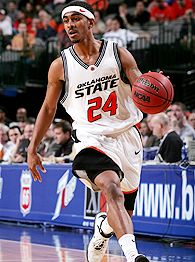 The 6-foot-3 guard from Pleasant Grove, N.C., was the Cowboys' second-leading scorer last season, averaging 17.3 points per game. He also led Oklahoma State in assists. The Cowboys finished 22-13 and lost in the first round of the National Invitation Tournament.

Curry said he will attend the NBA's pre-draft camp, which starts May 29 in Orlando, Fla.

"It's a win-win situation," he said. "I'm going to be motivated to go out and play and have them tell me what I need to work on."

"JamesOn and I have visited on several occasions about whether or not to enter his name into the NBA draft,'' Sutton said in a news release. "... We will get all the necessary information so that he can make a wise career decision on his part.''

The draft will be held June 28. Curry has until June 18 to withdraw from the draft and return to Oklahoma State if he is not satisfied with his potential draft position and does not hire an agent.