Why not tab the Tigers as a possible pre-preseason No. 1? 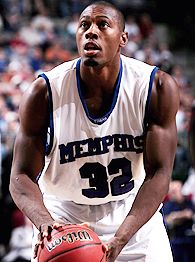 The deadline to declare for the NBA draft was Sunday night. Of all the potential favorites, Memphis was the only team that didn't get hit. And if you watched any of the high school all-star games the past month, you know the Tigers are adding one of the best players in the country in big guard Derrick Rose.

So add in Rose, along with another high school senior stud in wing Jeff Robinson, to a core of players like Chris Douglas-Roberts, Robert Dozier, Joey Dorsey, Antonio Anderson, Doneal Mack, Willie Kemp, Andre Allen and Kareem Cooper, and you have the makings of a potential national champ.

Remember, this core group has been in back-to-back Elite Eight games. They have the experience. They are clearly winners. The only departure is senior Jeremy Hunt, whose toughness, according to Memphis coach John Calipari, will be replaced by Rose.

"It's scary," Calipari said Sunday. "Everybody lost somebody except for us.

"Derrick Rose will blend in with our team and both he and Jeff are physically strong, tough kids."

Oh, by the way, the Tigers also had 6-foot-10 Iowa State transfer Shawn Taggart sitting out last season, and he should help in the post immediately.

"Adding him in the mix, and it being Joey's senior year with the hope that he'll be a bit smarter and more mature helps us," Calipari said, alluding to Dorsey's goading of Greg Oden prior to their Elite Eight showdown.

"You can make a case [for us as No. 1]. Everyone talks about our offense but we were in the top 10 defensively in three categories."

"We've got a terrific defense coming back, too," Calipari said.

Memphis will have the schedule, once again, to back up the talent. The Tigers, who finished 33-4 (16-0 Conference USA) and didn't lose a game between Dec. 20 and March 24, will play Arizona (Dec. 29), Gonzaga (Jan. 19, 2008) and Tennessee (Feb. 23, 2008) at home. Calipari said he purposely spread out these three nonconference games around the C-USA schedule. But that's not it, either. Memphis is in the Coaches vs. Cancer Classic, with potential meetings against Connecticut, Kentucky and/or Oklahoma in New York. The Tigers play USC in the Jimmy V Classic in New York, at Ole Miss and at Cincinnati, and take on Middle Tennessee State as part of a doubleheader in Nashville (Tennessee plays Western Kentucky in the other game).

The buy games -- against Holy Cross, Pepperdine and possibly Appalachian State -- aren't a cakewalk, either. And Conference USA should be much better with Robert Vaden and Walter Sharpe eligible to play for UAB after transferring from Indiana and Mississippi State, respectively.

So why not make Memphis No. 1?

Here is the rest of the Top 25, post-deadline declaration: