MINNEAPOLIS -- Howard Porter had recovered from drug
addiction and failed NBA dreams to become a mentor to young players
and source of hope for troubled adults in the Twin Cities.

His inspirational life ended with a mysterious death.

A week after he was found severely beaten in an alley, Porter,
one of the best basketball players in Villanova history, died
Saturday night. He was 58.

Minneapolis Police Lt. Kim Lund said Sunday that police were
awaiting a report from the medical examiner to determine the cause
of death. 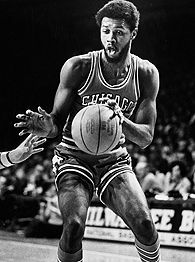 "Howard provided so many Villanovans with thrills on the
basketball court playing for coach [Jack] Kraft," Villanova coach
Jay Wright said in a statement released by the school. "Since his
playing days ended, he has been an outstanding role model for our
current players and coaching staff."

Porter, who worked as a probation officer for Ramsey County, had
been hospitalized since he was found in the alley without
identification May 19. Authorities didn't know at the time that the
man brought to the hospital as an unknown assault victim was
Porter.

Police said it was unclear whether the beating was connected to
his job. Lund said there have been no arrests and the investigation
is continuing.

Porter was a three-time All-American during a brilliant career
at Villanova. He led the Wildcats to the 1971 NCAA championship
game, where they lost to UCLA 68-62. He was voted the tournament's
outstanding player, an honor later vacated because he had been
dealing with an agent before the season ended. Villanova's 1971
runner-up finish also was vacated.

Porter was drafted by Chicago in 1971 and spent three seasons
with the Bulls before playing with the New York Knicks and the
Detroit Pistons. But a career that showed so much promise in
college never blossomed in the NBA, and Porter began using drugs.

"I took a ride with the devil," Porter told the Star Tribune
in a 2001 interview. "And the devil picked me up and rolled me for
a while. But I always knew, deep down inside, I felt God wasn't
through with me yet."

By 1985, he was out of money, addicted to cocaine and sleeping
on the couch at his mother's house in Florida, the newspaper
reported. He went to rehab at Hazelden in Center City, Minn., in
1989, then moved to a halfway house in St. Paul and began turning
his life around.

Porter became a probation officer for Ramsey County in 1995,
where he supervised adults who had been released from prison or
sentenced to probation. He oversaw violent and nonviolent
offenders, making sure they followed the law, as well as terms of
their release.

When the Wildcats came to Minneapolis during the NCAA tournament
two years ago, Porter spoke to the team and befriended star guard
Randy Foye, who was became a lottery pick by the Minnesota
Timberwolves before this season.

"The guy was a legend," Foye said in a phone interview with
The Associated Press. "I met him two or three times at Villanova,
but our relationship really grew when I came to Minneapolis. He was
just always there, always offering to help me out with anything I
needed, if I had any questions about basketball or life in
general."

Since taking over the Villanova program, Wright has made a point
of including alumni in the team's activities. He spoke glowingly of
Porter's presence during the Wildcats' trip to Minneapolis two
years ago and called his death a blow to the school's community.

"Howard was a kind, gentle, and humble man who loved his family
and Villanova," Wright's statement read. "We will all miss
him."