Neither person was injured or required medical treatment. 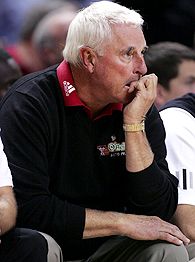 Mary Ann Chumley said she was struck on the foot by a stray
pellet on Oct. 20 in an incident she characterized as an accident.
She said Knight apologized for hunting too close to her barn and
she forgave him.

Another resident near the dove field said the coach and another
hunter returned the next day and one of them intentionally fired a
shotgun in his direction.

James Simpson told Lubbock police he was struck on the neck and
back by pellets after yelling at Knight and another man he believed
were hunting too close to his house. Simpson's backyard is about
100 yards from where Chumley was struck the previous day.

Simpson and Chumley each said the shots were fired from a
distance of about 250 feet. Both said the pellets did not break the
skin.

During an interview Tuesday with The Associated Press, Knight
described allegations that shots were intentionally fired at
Simpson as "ridiculous."

"That's all been taken care of, that's over with," Knight
said. "You haven't heard anything from that guy for two weeks.
That's done. I got no comment on that whatsoever because that's
absolute [expletive.]"

Lubbock police said they do not plan to seek charges against the
coach. They declined to release two supplemental police reports
stemming from Simpson's incident pending a review by the city
attorney.

Chumley said she was sitting on the tailgate of a pickup near
her horse barn when she and one of her horses were struck by
pellets from Knight's shotgun.

"He said, 'I was shooting a bird and I followed it, and I
shouldn't have done that, and I know that,'" Chumley said,
recalling her conversation with Knight after the Oct. 20 incident.
"He apologized and I accepted his apology. As far as I was
concerned it was over."

But Simpson claims Knight and another hunter returned to the
field the next day, and their shotgun pellets landed in his
backyard on three occasions.

Simpson, 51, said each time he went and yelled to the two men to
stop shooting so close to his house.

Simpson said he believed the pellets were strays, but was
uncomfortable they were hunting near his home. After confronting
them again, he said he was struck on the neck and back by pellets
as he stood with his back to the field and cleaned his swimming
pool.

"He did it intentionally," Simpson said of the pellets that
hit him.

It is not the first time Knight has allegedly been involved in a
hunting incident.

In October 1999, Knight accidentally shot a friend in the
shoulder and back with 16 pellets while grouse hunting with three
other men in Wisconsin.

The man, Thomas Mikunda, was not seriously injured but required
medical treatment.

Knight told investigators his finger slipped off the safety of
his 20-gauge shotgun as he aimed at a bird, causing the gun to
accidentally discharge.

Knight was cited for failing to report the accident and for
hunting without a license. He pleaded no contest to each count and
paid $582.10 in fines.

In 2001, Mikunda and Knight reached a settlement after Mikunda
accused Knight of coercing him into backing his version of the
accident to avoid problems while coach at Indiana. Details of the
agreement were not released.