PASE, which stands for "Performance Against Seed Expectations," measures the average number of wins a team attains above or below the number its seed position would dictate that it achieves. PASE is calculated by tallying the positive or negative differences between actual and expected wins at each seed position. The total of these differences is then divided by the number of appearances to arrive at an average number of games the team either over-performs or under-performs per tournament.

For instance, the average No. 1 seed wins 3.36 games per tourney, while the average No. 2 seed nets 2.43 wins per dances. If a given coach appeared in the tournament once as a top seed and again as a No. 2 seed, his expected win total would be 5.79 games. If he actually won seven games, he would've "overperformed" by 1.21 games for his two appearances -- for a healthy PASE value of +0.610 (1.21/2 appearances). Generally speaking, a PASE above +.250 shows solid overachievement. A PASE of +.500 represents major over-performance. Mike Krzyzewski, for instance, is a +.543 PASE overachiever as a coach. That means his teams consistently win more than half a game above seed expectations per tourney.

As a handy reference, the graph below shows the average number of wins that a team with each seed has won per tourney since the field of 64 was introduced in 1985: 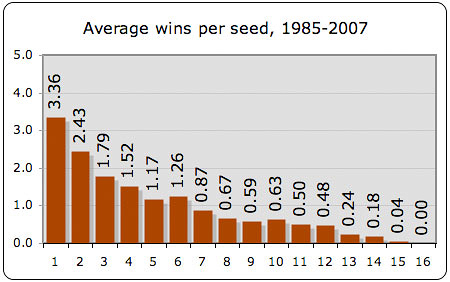 Freelance writer Peter Tiernan has been analyzing the NCAA Tournament for 18 years. E-mail him at bracketscience@comcast.net or go to www.bracketscience.com and check out the BracketMaster, which lets you do your own bracket analysis.