CHESTNUT HILL, Mass. -- Jeremy Fears had us at the backflip.

How could we not tap Ohio as ESPN.com's 2005-06 "It" school after Fears, upon request Saturday night after his Bobcats scrimmaged Boston College, did a handspring into a full backflip out on a rec center court?

Come on. This was too cool.

Fears is one of the top 10 sophomore point guards

in the country and clearly one of the most athletic. He first performed an impromptu backflip after hitting a game-winning shot to beat Detroit on the road Feb. 19. Then, during Ohio's improbable 19-point comeback against Buffalo in the MAC tournament title game, Fears did another one on the way back to the bench. 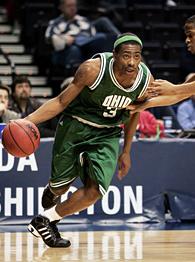 Ohio went on to beat Buffalo 80-79 in overtime to get the league's automatic NCAA berth. In the NCAAs, the Bobcats rallied from 20 points down to tie Florida late in the second half before losing by five.

A year ago, we dubbed George Washington our inaugural "It" school. The definition? Well, you've got to have "it," meaning some character, something that pops out about your squad. GW had (and still has) Pops Mensah-Bonsu, a dunking forward who has a cult following at the school. You also need to be outside the Top 25 to start the season and have a legit chance to win your league, get in the dance and do something.

GW had all of that, won the A-10 tournament and did earn a bid, albeit after a rocky middle of the season.

Ohio has all the goods, too.

But first, let's get back to Fears for a minute. You've got to hear the backflipping story.

Wait, it gets better.

"We used to have a couple of guys in the neighborhood of Joliet, Ill., [a suburb of Chicago] and we called ourselves 'ninjas' because from morning sunup to sundown, we would just flip."

Fears said the first flip against Detroit caught everyone off guard. The team video manager didn't catch it, and there is no recorded history of the move.

"I was running after he hit that game winner and I tried to grab him, but I had to stop so he wouldn't kick me," Ohio senior forward Sonny Troutman said. "Everyone heard about it on campus, but no one saw it."

Fears said he planned the Buffalo flip to get everyone excited.

"When he did it in the Buffalo game, I told him we were down a few points so I told him not to do it again and to calm down a bit," Troutman said.

O'Shea, though, didn't mind one bit. He's cut from a different cloth. He wants to win, loves coaching, adores this team, but he also can't get enough of his August downtime in Newport, R.I. And he embraces his players' enthusiasm, like Fears' flips.

"When he did it against Buffalo, it ignited the crowd and sent a message that if people were worrying about fatigue after a three-day tournament, we weren't," O'Shea said. "It was youthful exuberance. I hope everybody gets a chance to see it in the NCAA Tournament."

Fears hasn't been flipping in his downtime, though.

"The last time I saw it was in the Buffalo game, until you told him to do one just now," Ohio sophomore forward Leon Williams said. "It's crazy. You need to tell him to stop before he injures himself."

Well, we wouldn't want that on our conscience.

If Fears did get hurt, Ohio probably would move from "It" team to one that isn't. Fears and Williams are two of the best players at their positions in the MAC. Williams, who averaged 11.9 points and 8.6 rebounds a game, was the MAC Freshman of the Year and the MAC tournament MVP. Six-foot-8 Williams is trying to do for Ohio what Gary Trent and Brandon Hunter were able to do -- lead this team to the postseason on his way to making the NBA.

The Bobcats, though, are hardly a two-man team. O'Shea doesn't have a scrub in his top nine, and there's a backup at every position. Joining Fears and Williams are Troutman (12.6 ppg) and last season's leading scorer, Mychal Green (15.0 ppg), on the wing. The fifth starter could come from a variety of positions, with O'Shea having options such as quick backup point Whitney Davis, senior shooting guard Jeff Halbert, BC transfer wing Johnnie Jackson, beefy freshman forward Jerome Tillman or JC transfer guard Antonio Chatman.

"We're better than a year ago," O'Shea said. "We went on a foreign tour [of Belgium] and played some tough teams. Our freshmen [Williams and Fears] from a year ago should make a big jump as sophomores, and Green should make a jump in his second year after transferring from a JC. We added four players and one transfer who sat out. If we find the right chemistry, then we will be much better."

O'Shea put this team in a position to matter in March with a winnable and respectable schedule. Scrimmaging BC for the second straight year was the first barometer. O'Shea said that the Bobcats couldn't have contended physically a year ago but that that wasn't the case last week.

"I think we're really good, Top 25 good," Williams said. "I can't wait for those games, but I'm not going to put all the pressure on those and only worry about them. But the Kentucky and Cincinnati games will give us a chance to show the nation."

It might be important to show something in those games, as the MAC has been a one-bid league since 1999.

"Some teams don't have that self-confidence, but we do -- and it's based on real things like playing Florida, winning the MAC tournament, playing BC and knowing we can win," O'Shea said. "Many teams don't have the opportunity to enhance themselves, but we have at least two -- maybe four games, with Detroit and Rhode Island -- games that could be measuring sticks for a possible at-large bid. If we could pull off a couple of upsets, win our division and lose in, say, the semifinal of the MAC tournament, it could make a big difference."

If they do spring those upsets and find their way back to the NCAAs, don't be surprised to see another flip from Fears -- this time without any prodding.