One year ago, Illinois-Chicago and Wisconsin-Milwaukee evenly split the votes in the Horizon League's preseason poll.

Most of the conference's coaches and beat writers likely figured the two squads would spend the season fighting over a 13- or 14-seed, the winner receiving a nationally-televised beatdown in the NCAA Tournament first round -- much like the one UIC received at the hands of Kansas the previous March.

Few college hoops followers (save for the most devoted UWM Klotsche Krazies) could have projected that just four months later, the 2004-05 Panthers would capture the imaginations of underdog lovers everywhere.

After clinching the Horizon League's automatic bid, they blitzed high-majors Alabama and Boston College and spent a glorious week basking in the warm glow of national attention. By reaching the Sweet 16, the little hyphenated school from America's Dairyland went farther than all of mid-majordom's designated preseason darlings: beyond Vermont, past Old Dominion, eclipsing even mighty Gonzaga (like the Zags are still a mid?). 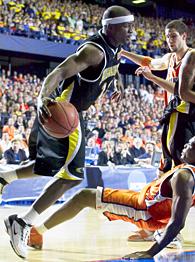 If you're playing the bracket-buster futures market and have carefully studied the preseason magazines, you've probably heard plenty about this year's crop of "hot mid-majors to watch." With the aid of fancy computers and algorithms and stuff, an elite group of highly-trained experts has chosen teams like Northern Iowa, Creighton and aforementioned Old Dominion. Because of their scientifically favorable measures of returning sources of statistical output, preseason award recipients, conference RPI and non-league schedules, these have been tabbed as the squads that will bust your bracket and capture your heart at season's close.

But "Cinderella" was a storybook, not a laboratory manual. Perfectly-aligned stars (drawing a flawed power-conference also-ran in the opening round and then a complacent or tired one in round two) can result in a magical weekend for almost anyone in the draw. And a lot of T-shirt sales, too.

Whoever it is, odds are when the 2006 Tournament rolls around, this season's UWM will have a lot in common with last season's UWM -- namely it will be a group of guys most of Hoops Nation doesn't know that much about yet, quite possibly one with a giant chip on its collective shoulder from a previous season's slight.

Does that disqualify Bucknell, last year's giant killers? The Bison surely don't need much of an introduction now -- especially to ESPY voters and Kansas fans -- but they're used to entering the limelight, disappearing, and then resurfacing.

After a shocking 69-66 road win over Big East power Pittsburgh on January 3rd (and a subsequent win over NIT finalist St. Joseph's), the switchboard at the Lewisburg, Pa., campus was overwhelmed by media calls. Once Patriot League play began, though, Holy Cross emerged as the conference favorite and local interest waned as the Bison stumbled at modest places as American and Navy. By mid-January, the Bison were only managing half-capacity crowds and the orange-'froed arena MC struggled mightily to whip Sojka Pavilion attendees into anything resembling a frenzy. The kids couldn't even get enough people to paint their bodies to spell out the school's name -- they had to settle for "BUCKN."

So, we're not going to be fooled into believing the Kansas win created mass acceptance. Sure, home games against Villanova and St. Joseph's have sold out already and there have even been a few "Rock, Chalk, Take a Walk" T-shirts seen on the streets around campus, but the Bison are undoubtedly still a mid -- which is a good thing. Just don't tell anyone they have all five starters back, including underrated point Abe Badmus, sharpshooter Kevin Bettencourt, athletic wing Charles Lee and legit big man Chris McNaughton.

One state to the west, you'll find Ohio in the MAC. Last year's Bobcats were a perfect example of conventional wisdom gone wrong: They were coming off a 10-20 record and starting three freshmen, their limp collection of preseason tea leaves spelling out a consensus last-place pick in the MAC East.

So much for preseason polls. Tim O'Shea's squad grew up fast when it mattered -- winning four elimination games in six days, including a 19-point second-half rally to capture the MAC flag, and coming within five points of knocking off Florida to reach the Thirsty 32. All of a sudden, their green team blossomed into what is now an experienced and talented cast (led by two sophomores, backflipping point Jeremy Fears and inside force Leon Williams, and two upperclass scorers in Mychal Green and Sonny Troutman).

Almost as important in these quarters, a Bobcat game is a great show -- and it's not just because their dance team can do a spot-on rendition of the "Napoleon Dynamite" jig. Ohio plays a hyper-athletic, death-defying brand of basketball that rekindles memories of last year's Wisconsin-Milwaukee team and possesses that ethereal quality of "spurtability."

If going out on a limb is your bag, consider the possibility of the University at Albany. You'll probably remember the America East as Vermont's romper room in recent years, but the Catamounts are deep in rebuilding mode, so it's the dawn of a new shift in power in the so-called "Cats and Dogs" conference.

UAlbany was a Division II power until joining the NCAA's top level in 1999. After 20 total wins in their first three AE seasons, they fielded their first fully-scholarshipped roster last season and won 13 games -- and are perfectly positioned to take the next step. What's the Great Danes' delicious piece of mid-majorness? They currently let people into their home games for free once halftime starts.

Indeed, the next mid-major success story could come from anywhere. It might be a school with recent Tournament experience, like Winthrop or Western Kentucky, or a team with a completely overcast crystal ball, like Wofford or Western Carolina. It definitely could come from a school following the UWM model of breaking through a year after conference tourney pain. If that's the case, pencil in Davidson (16-0 in the Southern Conference last year and a quick conference tourney exit), Gardner-Webb (best in the Atlantic Sun before a loss to Central Florida in the title game) or Oral Roberts (who had an automatic berth all but sewn up last season until the last second of the Mid-Continent championship game against Oakland).

Or it very well may turn out that the next UWM will be ... UWM (or Milwaukee, as the school now wants to be branded, a development similar to Charlotte's escape from hyphenville on its way to building a perennially good program).

Some pundits are guarded in their optimism regarding the Panthers' chances for a repeat performance. This is primarily due to the twin departures of coach Bruce Pearl to Tennessee and last season's Horizon League Player of the Year, Ed McCants (17.7 ppg), to graduation. But the rest of the cast from the Sweet 16 run is back for more -- most notably, forward Joah Tucker, who averaged an eye-popping 25.1 points in the Panthers' three Tournament contests.

And who says there's a rule that says lightning can't strike twice. Even if there is, the folks at UWM hope that Hoop Zeus will be confused by the new faces and throw another bolt their way. That's fine, as long as the Panthers stay mostly on regional TV and maintain their general hyphen-ness, brand change or not.

Kyle Whelliston is the founder of midmajority.com and is a regular contributor for ESPN.com. Starting in December, Kyle will be writing on mid-major basketball five days a week on ESPN.com.