Georgia Tech finished last season with a losing record. The Yellow Jackets lost to Illinois-Chicago, Georgia and Air Force and finished 4-12 in the ACC.

A year later, the Yellow Jackets are Final Four-ready.

Georgia Tech, more than any other team in the country, is poised to do what Florida did during the 2005-06 season: rise from an afterthought in the preseason to the team cutting down the nets on the final night of the NCAA Tournament.

More than anything, though, the Yellow Jackets are hungry to get back to the NCAA Tournament after getting embarrassed too many times last season.

"I think last season helped them grow up and motivated them to work harder in the offseason," Georgia Tech coach Paul Hewitt said. "That's a silver lining to going 11-17. There are a lot of guys coming back that are still stinging from that. It's motivating them to work harder to make sure it doesn't happen again." 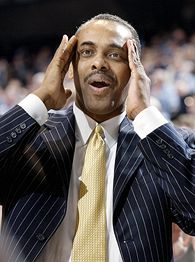 Last season's dismal performance came only two seasons after the Yellow Jackets finished 28-10 and lost to Connecticut 82-73 in the national championship game.

"We felt like we lost a lot of respect last year, not only from our fans, but from our opponents, too," West said. "We've got to build that back up."

How good the Yellow Jackets really are could be decided by how quickly Crittenton and Young grow up. Young, a 6-foot-6, 215-pound native of Memphis, Tenn., was named a McDonald's All-American and
was ranked among the top 10 prospects nationally as a senior. He is expected to start at small forward immediately and might help form one of the ACC's best frontcourts with Dickey and junior Jeremis Smith.

Young scored 20 points, grabbed three rebounds and had five assists in a 96-52 exhibition win over Morehouse on Saturday.

Even though Young was so highly regarded, and might have entered the NBA draft out of high school if not for the league's new age requirement, Hewitt said he's a player who is eager to improve. When Young struggled with his shooting during his senior season at Mitchell High School in Memphis, Hewitt encouraged him to keep his elbow under the ball. A week later, Hewitt learned Young was on a scoring tear. Hewitt called his prized signee for a report.

"He said, 'Coach, I'm going to wait until you see me shoot,'" Hewitt said. "He never felt that he was quite good enough."

"A lot of people ask me to compare [Young] to Bosh. He's a different player than Bosh," Hewitt said, noting that Bosh had a more refined post game but Young is a better ball handler and has better range on his jump shot.

Like Bosh, though, there is speculation that Young could play only one season for the Yellow Jackets before turning pro. Hewitt said he wouldn't be surprised if Young stays longer.

"I know him," Hewitt said. "I know he wants to be the best. I know he's focused on his academics and basketball. I know he feels like he's learning a lot during the practices. Don't get me wrong. He's talented. It's not like he's a project coming from the ground floor. He's a tremendous talent."

So is Crittenton, another McDonald's All-American, from Southwest Atlanta Christian Academy, which produced Orlando Magic star Dwight Howard. Crittenton, a 6-4 point guard, was handed the starting job when he stepped on the Georgia Tech campus this summer. He was
widely regarded as one of the country's best point guard prospects after averaging 29 points, seven rebounds and nine assists, leading Southwest Atlanta Christian to the Georgia Class A state championship.

Zam Fredrick, who started at point guard last season, transferred to South Carolina after Crittenton signed with the Yellow Jackets. Crittenton scored 15 points on 5-for-8 shooting and had eight assists and four turnovers in the exhibition game.

"He's still got some things to do," Hewitt said. "He's still got a ways to go. It's his job, but that's not to say somebody can't come up and take it. That's always the deal in sports. He has to understand that as the point guard, he has to be reliable. He's got to do everything he can to be physically ready to play."

Hewitt wants a point guard who can push the pace in games. The Yellow Jackets struggled to do that last season, when they ranked next-to-last in the ACC in turnover margin and assist-to-turnover ratio. Fredrick had nearly as many turnovers (97) as assists (110).

"I just want a point guard that I know is going to defend the ball real hard and push the tempo," Hewitt said.

The Yellow Jackets can run more this season because they have more depth. Six players are back who averaged more than 18 minutes per game last season. Junior guard Anthony Morrow, the ACC's leading 3-point shooter last season, should return later this month after being sidelined with a stress fracture in his back. Clinch averaged nearly nine points and made 31 3-pointers as a freshman, and West started 17 games in 2005-06.

West, a senior from Douglasville, Ga., is one of the team's top defenders and will back up Crittenton at point guard. Mouhammad Faye, a native of Senegal who redshirted last season, might help improve the Yellow Jackets' perimeter shooting. Hewitt signed the 6-8 forward sight unseen, on the advice of a close friend who is an NBA scout.

"I think this team will probably be more like the teams we had at Siena," said Hewitt, who coached three seasons at the Loudonville, N.Y., school before leaving for Georgia Tech in 2000. "I think we'll have better shooting and longer players."

And better defense, if Hewitt gets his way. Georgia Tech's opponents shot 44.1 percent last season, second-highest in the ACC, and the Yellow Jackets had only 116 blocked shots, third-fewest in the league.

Two other freshmen, Zach Peacock and Brad Sheehan, will add depth in the post.

"It starts with defense," West said. "Defense is what got Georgia Tech to an ACC championship and the Final Four. We've got to get back to that."

If the Yellow Jackets do, they might get back to where they want to go -- and where the Gators ended up a year ago.

Six others to watch

Florida State: The Seminoles might have been a preseason Top 25 team if junior Alexander Johnson hadn't bolted for the NBA draft. Without him, the Seminoles might play four guards. Forward
Al Thornton arguably is the ACC's second-best player behind North Carolina's Tyler Hansbrough, and Auburn transfer Toney Douglas is a pure scorer. After getting left out of the NCAA Tournament in 2005-06 despite finishing 9-7 in ACC play, Florida State beefed up its nonconference schedule. Early games against Pittsburgh, Wisconsin and Florida will test the Seminoles.

Xavier: The addition of Oklahoma transfer Drew Lavender, a pure point guard, gives the
Musketeers their best team since Lionel Chalmers and Romain Sato led them to the NCAA Tournament region finals in 2004. Lavender's arrival frees up junior Stanley Burrell to do what he does best: score. Burrell averaged 14.4 points as a sophomore and loves to take big shots. Seniors Justin Cage, Justin Doellman and Josh Duncan are reliable frontcourt players and each can run the floor, which is what Lavender will try to do each time he touches the basketball.

Southern Illinois: The Salukis return eight players from a team that won 22 games and played in its fifth consecutive NCAA Tournament in 2005-06. Under coach Chris Lowery, the Salukis play suffocating half-court defense and pressure the basketball relentlessly. Last season, Southern Illinois held opponents to only 56.5 points, fourth-best in the country. If the Salukis improve their accuracy from the 3-point and foul lines, they could challenge Creighton for the Missouri Valley Conference title.

Wichita State: Another MVC team to watch, the Shockers return all but one starter from a team that advanced to the Sweet 16 last season. Replacing Paul Miller, the MVC Player of the Year, will be a tall order because he commanded double-teams in the post, but guards Sean Ogirri and P.J. Couisnard are potent scorers. Returning point guard Matt Braeuer doesn't turn the ball over very often and the Shockers added Israeli import Gal Mekel to help run the show.

Nevada: The Wolf Pack returns all five starters, including two-time WAC Player of the Year Nick Fazekas, who can score inside and outside. The 6-11 Fazekas opted out of the NBA draft this summer despite averaging 21.8 points and 10.4 rebounds as a junior. Guards Marcelus Kemp, Kyle Shiloh and Ramon Sessions must shoot consistently from the perimeter to ease the attention Fazekas will receive.

Louisville: Despite a couple of off-court defections -- Chad Millard to Creighton and Brian Johnson to Mississippi State -- the Cardinals return what might be coach Rick Pitino's deepest team. Getting back to the NCAAs after going to the NIT in 2005-06 might be tougher without Taquan Dean, but center David Padgett returns from a knee injury that caused him to miss most of last season, and forward Juan Palacios has the potential to be a potent scorer. Newcomers Derrick Caracter and Earl Clark give Louisville more muscle in the paint.