COLLEGE PARK, Md. (AP) -- Josh Howard sat in front of his locker,
sobbing uncontrollably with his head buried in a towel.

Playing with a painful sprained left ankle, Howard had 18 points
and 15 rebounds in 25 gritty minutes for Wake Forest (No. 21 ESPN/USA Today, No. 20 AP)on
Sunday. But the junior forward also made a mistake that will haunt
him for the rest of his life. 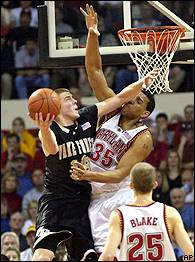 Juan Dixon made a technical foul shot with 1.3 seconds left
after Howard called a timeout the Demon Deacons didn't have, giving
No. 2 Maryland a 90-89 comeback victory.

Lonny Baxter scored 25 points and Dixon added 20 for the
Terrapins (23-3, 13-1 Atlantic Coast Conference). Maryland fell
behind midway through the first half, trailed by 12 shortly after
halftime and finally regained the lead in the final two minutes.

"We were very fortunate to win that game," Terrapins coach
Gary Williams said. "That's really the first game we've had that's
come down to a last-second situation. It was a good experience for
us."

And an absolute disaster for Howard, who had tears streaming
down his face as he addressed his untimely error, the same miscue
Michigan's Chris Webber made in the 1993 NCAA championship game
against North Carolina.

"It was instinct. I could make a million excuses, but I just
messed up," Howard said. "A lot of people have done it. I'm just
one of them. The worst thing is that I let down my team."

The Terrapins led 89-87 before Howard scored in the lane and was
fouled with 10.1 seconds left. He botched the free throw, and after
Dixon missed a jumper for Maryland, Howard grabbed the rebound and
quickly formed a "T" with his hands.

But the Demon Deacons had already used their final timeout, so
Howard was slapped with an automatic technical foul. Dixon made the
first shot, missed the second, and Wake Forest's Broderick Hicks
was very short on his long field goal attempt as time expired.

"I'm happy he did it," Maryland guard Steve Blake said of
Howard's timeout call. "I can't be too sorry for him; it won us
the game."

It was the 10th straight win for Maryland, off to the best start
in school history and now one game ahead of second-place Duke in
the ACC. The Terrapins have won seven in a row against Wake Forest,
none nearly as dramatic as this one.

Craig Dawson scored 27 points for the Demon Deacons (18-10,
8-6), but made only two field goals in the second half. Darius
Songaila scored 20 points and Howard starred in a reserve role
despite missing three of the previous four games after hurting his
ankle.

Wake Forest is 1-4 since the injury to Howard, who ranks second
on the team in scoring and rebounding.

"Obviously, we're not where we're at in that game without
Josh," Wake Forest coach Skip Prosser said. "I thought he was
very courageous in playing as many minutes as he did."

And the timeout call?

"He's cognizant of it. We'll deal with it," Prosser said.
"That's basketball. I'd rather fix the problem rather than
(assign) blame."

Maryland trailed 85-81 before Chris Wilcox scored on a hook.
After a Wake Forest timeout, Dixon stole the inbounds pass, was
fouled and made two free throws to tie it with 2:13 left.

Byron Mouton then hit a foul shot to give Maryland its first
lead since 34-33, and Wilcox followed a Wake Forest miss with a
free throw for an 87-85 lead.

But the game was far from over.

"I just told the players we were going to figure out a way to
win," Williams said. "Of course, I hadn't figured out a way yet,
but it sounds good to the players to say that."

Maryland's comeback began after Wake Forest scored the opening
basket of the second half to take a 58-46 lead. Maryland responded
with five straight baskets, two by Wilcox, to get within two points
with 17:52 left.

It was 64-63 before Songaila scored in the lane and he later
added two free throws to put Wake up by five. Tahj Holden then hit
a 3-pointer for Maryland and Blake followed with a layup to tie it.

Dawson had 22 points at halftime on 8-for-9 shooting, including
6-for-7 from beyond the arc, and Wake Forest shot 63 percent from
the field in taking a 56-46 lead.

Baxter was also 8-for-9 in the first half, but Dixon missed
seven of eight 3-point attempts.