MINNEAPOLIS (AP) -- After letting a late lead slip away in five
of its losses last season, Minnesota was thrilled to finally win a
close one. 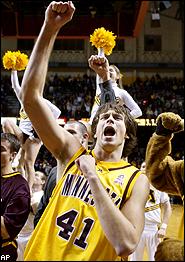 Michael Bauer's 3-pointer rolled in at the buzzer Saturday to
give the Golden Gophers a 72-69 victory over Georgia (No. 18 ESPN/USA Today, No. 17 AP).

Bauer, who missed two practices this week with a shoulder sprain
and couldn't shoot without pain until Friday, scored 10 points for
Minnesota (No 22 ESPN/USA Today, No. 24 AP).

He launched his final shot from the top of the key with 2
seconds left and watched it bounce around the rim before dropping
in.

Then, eyes wide open, he turned and raced toward the student
section of the stands to celebrate.

"Fans were trying to pat me on the shoulder,'' Bauer said,
"and it hurt a little bit. But it was worth it.''

Jarvis Hayes, who scored 17 of his 21 points in the second half,
helped Georgia (1-3) rally from a six-point deficit with 1:40 left.
He made a tough layup in traffic, drawing a blocking call that
fouled out Minnesota's Jerry Holman, and converted the three-point
play to cut the lead to 68-66 with 50.5 seconds left.

"This just showed we're a different team than we were last
year,'' said Minnesota's Moe Hargrow, who had 15 points. "Last
year, our body language would've been negative, and we would've
been like, 'He hit that shot. How are we going to win this game?'''

The Gophers' misfortunes in the final few minutes of games last
season cost them an NCAA Tournament bid, but this victory can do a
lot for their confidence.

Their best player, Rickert, was 0-for-5 in the second half, and
they displayed the patience and discipline on offense that wasn't
always there last season.

The Gophers (2-0) also didn't let Georgia lure them into an
up-and-down game, and they were selective with their outside shots.

"That was a very talented, well-coached team we played,''
Minnesota coach Dan Monson said. "Give credit to them. But give
credit to us to not let it get away.''

Kevin Burleson hit four 3-pointers and scored 14 points for
Minnesota, which shot 17-for-25 from the foul line and is only
40-for-65 (62 percent) this season.

Ezra Williams had 13 points, and Chris Daniels and Rashad Wright
11 each for Georgia, which beat the Gophers 77-55 at home last
season.

It was the first time since 1999 that the Gophers and their
opponent were both ranked.

"I love these kind of wins,'' Bauer said. "Blowouts really
don't show you too much when you're trying to learn what you need
to fix.''

The Bulldogs, who also lost to third-ranked Texas and rival
Georgia Tech, play their next three games away from home against
Colorado, California and No. 20 Gonzaga. They conclude their
nonconference schedule against No. 5 Pittsburgh on Dec. 31.

"I think games like this make you better,'' Georgia coach Jim
Harrick said. "I just think it helps you more than it hurts you.''

The Bulldogs have played without center Steve Thomas, who's
suspended because of academic troubles.

"He's our middle man, our heart and soul,'' Harrick said. "We
hope to get him back in a couple games. If we don't, we're going to
have a mediocre kind of year.''

The Gophers, who host Georgia Tech on Wednesday, never trailed
over the first 34 minutes but couldn't sustain a comfortable lead
against the Bulldogs.

The Gophers grabbed their biggest lead, 34-24, with 2:03 left in
the first half, but the Bulldogs chipped away and tied it at 56 on
Wright's 3-pointer with 6:44 remaining in the game.