LOUISVILLE, Ky. -- Indiana coach Mike Davis, enraged by a
foul not being called, ran wildly onto the court before the game with Kentucky was over Saturday. 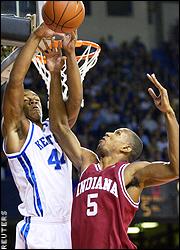 After being ejected and watching the Wildcats (No. 16 ESPN/USA Today; No. 18 Associated Press) make
five throws with 2.6 seconds left for a 70-64 victory to hand his
sixth-ranked Hoosiers' their first defeat of the season, Davis was
subdued and apologetic.

"There's no way I should've acted like that," said Davis,
thrown out of a game for the first time. "I can't explain it. I've
done something to embarrass my team.

"There have been a lot of games won with 2.6 seconds on the
clock," he said. "I cost us the game. I was so emotional. I need
to learn and grow from this."

"It's a very emotional game and coach Davis is a strong competitor, and he wants to win," Clapacs said. "Am I pleased or happy that he did that? No. He isn't either. On the other hand, he's our basketball coach and I think he's a terrific basketball coach.

"This is Indiana-Kentucky, and it seemed to me that we were in a good position to win the game and Mike's emotions just got the better of him."

It was Davis' second meltdown playing Kentucky in Freedom Hall.

Two years ago, after an 88-74 loss to the Wildcats, Davis said
in his postgame news conference that he wasn't the man to succeed
Bob Knight as the Hoosiers' coach.

Davis, who led Indiana to the national championship game last
season, was ejected for running on the court to protest a non-call
on a possible game-winning layup by freshman Bracey Wright.

The Hoosiers (8-1) trailed only 65-64 when Davis exploded, but
Keith Bogans made five of the six ensuing free throws to put the
game out of reach.

The Wildcats (6-2) took the lead on a layup by Marquis Estill
with 12.8 seconds left, the sixth lead change over the final 2:16.

The Hoosiers didn't call a timeout in the closing seconds and
the ball ended up in the hands of Wright, Indiana's leading scorer.

He drove to the basket, but missed a layup off the side of the
backboard.

"To tell you the truth, I really didn't see it once I went
up," Wright said. "All I saw were a lot of white jerseys and a
lot of arms. Then, I saw myself going into a cameraman."

Bogans got the rebound, but Davis exploded off the Indiana bench
and ran to confront referee Bert Smith near the free throw line. He
slapped his forehead and screamed that Wright was hit in the face
by Kentucky center Jules Camara.

"No matter what the officials call, sometimes we're wrong and
they're right and we don't know," Davis said. "I do apologize to
that official, because there's no reason for me to act that way."

"I want to see the replay," Camara said. "I was told it was a
clean play. I don't know if I got him with the body or not."

Smith gave Davis plenty of leeway before calling two technical
fouls as the furious coach followed him to midcourt.

Once Davis departed, Bogans walked up to Wright.

"I told him I thought he got fouled," Bogans said. "That's
what it looked like to me."

The 6-foot-9 Estill, fifth in the nation in field goal
percentage, scored four consecutive baskets early in a 23-7 Kentucky
run, and Bogans finished it with a layup for a 31-24 lead.

Estill had 12 points at halftime, his season scoring average.
The Wildcats hit 13 of 20 shots after missing 14 of their first 16.

They also outrebounded Indiana 25-14 and held the Hoosiers to
3-for-12 shooting from 3-point range.

"They were tricky with their defenses," Newton said. "They
played some zone and played some man-to-man and did a good job of
mixing things up."

Estill picked up two quick fouls in the first two minutes of the
second half, but the Wildcats got seven of the half's first 10
rebounds and pushed the lead to 10.

Estill then fouled A.J. Moye on a drive with 14:52 left and
Bogans replaced him, giving Kentucky a lineup with no one taller
than 6-8 Erik Daniels.

The Hoosiers started attacking inside and twice cut Kentucky's
lead to one with Estill -- Kentucky's best shot blocker -- on the
bench.

Estill returned near the nine-minute mark, but was tentative
guarding Newton, who scored 10 points in three minutes. His free
throw with 5:30 left tied the game for the first time, at 58-58.

Kentucky beat Indiana for the eighth time in nine meetings and
the sixth consecutive time in Freedom Hall.

"We play big games all the time," Smith said. "We feel, when
the right team shows up, we can beat anybody in the country."