WASHINGTON (AP) -- The backdoor was closed. The 3-pointers
weren't falling. North Carolina State had just 18 points at
halftime and hadn't made a single jump shot. Leading scorer Anthony
Grundy was in foul trouble. 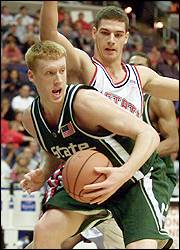 So the Wolfpack turned to Plan B.

With freshmen Julius Hodge and Ilian Evtimov leading the way,
N.C. State started taking the ball straight to the basket.
Converting layups and three-point plays, they rallied from a
12-point halftime deficit to beat Michigan State 69-58 Friday in an
East Regional opener.

"It was pretty quiet in here at halftime," said Evtimov, who
scored 10 of his 12 points in the second half. "We told each
other, 'We've got to pick it up. There's no tomorrow if we lose.'
"

The seventh-seeded Wolfpack (23-10) shot 25 percent in the first
half and 67 percent in the second to win their first NCAA
tournament game in 11 years.

Hodge scored 16 points, including back-to-back three-point plays
that tied the score early in the second half. Grundy also had 16,
but he spent most of the second half on the bench with four fouls.

"We're a young team with two older guys that are playing a lot
of minutes that haven't been in this position before -- we're
handling it pretty well," said point guard Archie Miller, who hit
a big 3-pointer to start the second half. "There seemed to be a
little bit of a lid on the basket in the first half, and a lot of
pain is eased when you can get something to drop down."

Chris Hill scored 21 points, and Marcus Taylor had 18 on just
5-for-22 shooting for the 10th-seeded Spartans (19-12), who
struggled against the Wolfpack's aggressive defense and full-court
press. Michigan State shot a season-low 32 percent.

"It didn't seem anybody could score at times," Hill said.

With the Spartans' guards waiting for them at the 3-point line,
the Wolfpack were smothered as they tried to run their offense in
the first half. All their points came from layups, runners in the
paint and foul shots.

But Evtimov became a major player in the second half. Rather
than look for the backdoor or the outside shot, the Wolfpack drove
to the paint and produced four three-point plays in the second
half. They started the half with an 11-2 run, going 5-for-5 from
the field and forcing three turnovers in Michigan State's first
five possessions.

Grundy got his fourth foul with 14:47 to play, but Hodge took
over with his back-to-back three-point plays to tie the score at
37.

"When he went out of the game, we needed someone to step up and
make shots," Hodge said. "And I kind of took it upon myself to go
in there and make some plays. Today the ball just fell into my
hands in the right places."

Scooter Sherrill followed with two free throws to give N.C.
State its first lead since 6-5.

Meanwhile, open shots were few and far between for the Spartans,
and the deficit was as big as 13 before consecutive 3-pointers by
Hill and Taylor cut the lead to 60-55 with 2:21 remaining.

But the Wolfpack went 9-for-10 from the free-throw line in the
final two minutes to stop the comeback -- and Izzo's impressive run
of Final Fours.

"It's been more positive than negatives," Izzo said. "And I
think I'll enjoy that more a couple of days from now than I do
today."