MADISON, Wis. (AP) -- The Jayhawks met a team that wanted to run
with them. They jumped all over the Ducks instead.

Fans across America saw Sunday why Kansas has been picked by many to win the national championship. The Jayhawks dominated inside and on the glass -- how about a 63-34 rebound advantage, including an amazing 26 offensive rebounds.

Drew Gooden and Nick Collison each had double-doubles by early
in the second half Sunday, and top-seeded Kansas never trailed in a
104-86 rout of Oregon that put the Jayhawks in the Final Four.

Kansas controlled the fast, end-to-end action in the Midwest
Regional final and dominated the boards, outrebounding
second-seeded Oregon 63-34. Indeed, Gooden and Collison
outrebounded the Ducks all by themselves -- 35 to 31 -- and the
Jayhawks grabbed 26 offensive rebounds, leading to 31 second-chance
points.

"We knew the way to beat them was to beat them on the boards
and get extra shots," Gooden said. "I think it was contagious. We
were relentless out there on the backboards."

Gooden had 18 points and 20 rebounds, and Collison added 25
points and 15 rebounds, putting the Jayhawks (33-3) in their first
national semifinal since 1993 and third under coach Roy Williams.

Kansas faces Maryland in Atlanta next Saturday. The Terrapins
beat Connecticut 90-82 in the East Regional final.

"They crash the boards all the time, every single play," said
Frederick Jones, who led the Ducks with 32 points. "Their guards
came in and got some, too. It was an all-around effort."

The Jayhawks, the nation's highest-scoring team with a 91-point
average, outmuscled and outhustled the beefier Ducks on the glass,
fueling their up-tempo game.

"I liked it because it was up and down, even though we were
beating each other for layups," Gooden said. "You probably can't
see my feet right now. I've got my shoes off. My dogs are
hurting."

"I thought we were going to blow it out several times. But
they're a hard-fighting team, a great team, and they didn't give
in," Jayhawks point guard Aaron Miles said.

But Kansas scored the next 10 points, four by Collison, to end
the Ducks' dreams of reaching the Final Four for the first time
since they won the first NCAA championship in 1939.

"Drew took all that as constructive criticism. Twenty rebounds,
what more can you say? Nick Collison battled his rear end off."

It appeared as though the Jayhawks were going to run away with
it early when Hinrich's layup gave Kansas a 40-28 lead.

But the Ducks (26-9), playing in a regional final for the first
time in 42 years, scored the next 12 points, seven by Jones, to tie
it at 40 with 2:57 left in the first half. Jones had two slam dunks
off steals and capped the burst with a 3-pointer.

Oregon had two chances to take the lead, but Luke Ridnour (nine
points) missed a layup, and Jones missed a 3-pointer, and
Collison's basket put the Jayhawks back ahead for good. 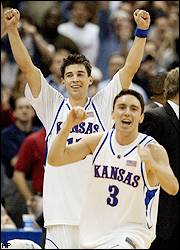 "I didn't feel like I could do anything I wanted," Collison
said. "I felt I had to be aggressive and take it at him. I
couldn't settle for posting up and shooting a fallaway jumper,
because then he wins that battle. I just tried to keep attacking
him and going around him."

Ducks coach Ernie Kent had said the only way to run with Kansas
was to play good defense and crash the boards.

"I remember probably five or six times, we did a pretty good
job in the matchup zone and got them to miss, and then they'd get
an easy putback," Ducks coach Ernie Kent said. "And when they get
an easy putback -- No. 1, it keeps us out of transition; No. 2, it
gets us into foul trouble, reaching at the; and No. 3, it just
gives them great looks."

Williams improved to 388-92 overall and 29-12 in the NCAA
Tournament, and Gooden said he's driven to win it all so his coach
can put to rest talk of his never winning a national championship.

"Just stop giving him heat about reaching the Final Four or
winning championships," Gooden said. "Because no matter what he
does, he's always going to be a great coach."