Who would have believed it? The Dukies are out! That's right, defending national champ Duke is gone, sent packing by coach Mike Davis and his fighting Hoosiers.

Indiana spotted Duke to a 17-point lead but battled back behind super soph Jared Jeffries, who was sensational. His versatility was incredible -- Jeffries scored 24 points and grabbed 15 rebounds (nine on the offensive glass). Indiana's Jarrad Odle was also tough inside, scoring 15 points (7-of-9 from the field).

Duke, the No. 1 seed in the South Region and No. 1 in the polls, had a problem all season on the interior. It showed in this game. more ...

With a never-give-up rally and a wild ending, Indiana produced an upset as stunning as any in the Hoosiers' hoops history.

After chipping away at a deficit that was as big as 17 points,
fifth-seeded Indiana took advantage of another miss by Williams at
the foul line to beat the defending national champion Blue Devils 74-73 in the South Regional semifinals Thursday night.

"We messed up a lot of brackets," Indiana coach Mike Davis
said. "Just tear 'em up, throw 'em away."

He picked up material for a pregame speech to his double-digit underdogs during a meeting Wednesday with coaches and administrators from the schools.

"One of the guys from Duke asked what time they played on
Saturday," Davis said. "I told my guys, 'You know, they've got a
great basketball team -- no doubt about that -- but when someone
disrespects us like this we've got to come out and fight.

Indiana (23-11), making it first trip to a regional final since
Bob Knight took them to the final eight in 1993, will play Kent
State on Saturday for a spot in the Final Four. Kent State advanced
with a 78-73 overtime victory over Pittsburgh.

Top-seeded Duke had a chance to tie it with 4.2 seconds left
when Williams -- a unanimous All-American -- was fouled as he made a
long 3-pointer to get the Blue Devils within a point. But he missed
the free throw, and Carlos Boozer couldn't convert a follow shot.

"I'm not stunned," Duke coach Mike Krzyzewski said after his team's eight-game NCAA tourney winning streak ended. "I'm 55 and I need a hip replaced. I coach a game where I know we can lose every time we go on the court."

It was the most significant victory of Davis' tenure, which began when Knight was fired in 2000. Davis has had to deal with the pressure of succeeding a coach who won three national titles in a state that treats basketball as religion.

"I am going to ask for a raise," Davis said, joking. "I am
trying to walk in the right spirit, and when you do that you have
to let some things roll off your shoulders. It's my job to put a
product on the court that Indiana fans can be proud of. It's my job
to make sure that my guys play hard for 40 minutes."

Jared Jeffries had 24 points and 15 rebounds for the Hoosiers,
who held Duke to 33 percent shooting in the second half.

That strong defense helped Indiana climb back into a game it
trailed 29-12 after 11 minutes, with 19 of Duke's points coming off
Indiana turnovers.

But just as in losses to Florida State and Virginia during the regular season, Williams failed to convert from the foul line when it counted most.

"The hardest thing is, this is it for me," said Williams, a junior who is heading to the NBA. "I've always dreamed of being in that situation, and the ball just didn't bounce my way."

Williams, only a 67 percent free-throw shooter, left the Rupp
Arena court in tears. 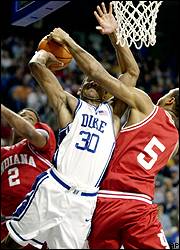 Duke was trying to be the first school with consecutive NCAA
titles since it won championships in 1991 and '92, and these Blue
Devils returned four starters from the team which beat Arizona in
the 2001 final. The Wildcats lost Thursday, too, falling to
Oklahoma 88-67 in the West Regional semifinals.

"Last year the ball bounced our way a lot," Duke's Mike
Dunleavy said. "I guess this game it didn't -- and we know what
happened."

Tom Coverdale's free throws with 1:54 left tied it at 70-all,
then he sank a baseline jumper over Chris Duhon less than a minute later. Suddenly, the Hoosiers had the lead -- and the crowd on their side.

Daniel Ewing missed a 3-pointer on Duke's next possession, and
the Blue Devils were forced to foul.

A.J. Moye made both free throws with 11.1 seconds remaining before Williams was fouled on his 3-pointer by Big Ten defensive player of the year Dane Fife.

After Williams missed his foul shot, and Boozer's putback try didn't fall, the game ended with a scramble for the loose ball.

The NCAA said it was reviewing a postgame confrontation between
Duke reserve Matt Christensen and official Bruce Benedict, who
happens to be a former major league catcher. Christensen, who did
not play Thursday, raced onto the court after the game ended and
approached Benedict.

The last words from Davis to his team before they ran onto the
floor: "Let's go shock the world."

The Hoosiers were shockingly bad, though, at the start.

Duke (31-4) wasn't quite ready to give in. Dunleavy made a long
3-pointer to give Duke a 70-64 lead with 2:50 left, and it appeared
the Blue Devils would advance to their 11th regional final under
Krzyzewski.

Duke eventually did fold down the stretch, though, against a team that battled harder over the final minutes.

Indiana was helped by the poor shooting of Williams. The guard followed up his 5-for-18 shooting game against Notre Dame in the second round with a 6-for-19 effort against Indiana.

"In warmups I was shooting the ball very well, and I thought I was going to shoot the ball well in the game," said Williams. "I started off hitting my first one and stuff just wasn't going down."

Boozer led the Blue Devils with 19 points and nine rebounds, but
he, along with several other starters, got into foul trouble late.
Duke's defense, which caused a season-high 23 turnovers by Indiana,
was soft inside late.

The Hoosiers "won the ballgame through their toughness," Krzyzewski said. "They just hung in there the whole time. We couldn't stop them and they were relentless on the boards. We just couldn't get that defensive stop to get a bigger lead."