GAINESVILLE, Fla. (AP) -- The fallaway jumper seemed to hang in
the air forever. Then, it swished -- all net. 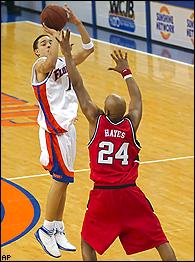 With that, Florida freshman Anthony Roberson answered the
question Georgia's Jarvis Hayes had been asking him all day with a
flurry of sweet jump shots of his own.

Can you top this?

Once Roberson got it, he saw his teammates clamber off the bench
and come running toward him. The slight, 6-foot-1 freshman from
Saginaw, Mich., kept backpedaling, backpedaling until there was
nowhere left to go. Then, he got caught in the celebratory mob.

"I saw it hit the net, I saw everyone running at me,' said
Roberson, who made seven 3-pointers and led the Gators with 23
points. "I thought they were going to hurt me.''

Indeed, their ninth straight victory was cause for a major
celebration for the Gators (13-2, 2-0 Southeastern Conference), who
matched their second-best start in school history.

"This is worse than that,'' Georgia coach Jim Harrick said.

Wasted in this loss was a shooting spree by Hayes, the standout
junior who said his No. 1 goal in the offseason was to improve his
outside touch.

He went 6-for-8 from 3-point range, including an amazing stretch
of three straight 3-pointers in the span of 90 seconds that pulled
the Bulldogs from nine points down to 58-58 with 2:12 left.

After Hayes' third 3-pointer, Roberson answered with a 3 of his
own -- the fourth of five he made over the final 9 minutes -- for a
3-point lead.

Georgia pulled within one on two free throws, then Hayes made
his sixth and final 3-pointer for a 63-61 lead with 57 seconds
left.

On the next possession, David Lee tied it with a dunk. With
Georgia working for the go-ahead basket, Hayes was called for
pushing off, a foul that sent Harrick into hysterics -- he had to be
restrained by his assistants.

Harrick thought it was ticky-tack stuff.

"In that situation, you let the players decide the game, not
the officials,'' Harrick said. "That's probably a no-call.''

The call gave Florida the ball with 19.1 seconds left. After a
timeout, the Gators were looking to Matt Bonner to take the
game-winning shot. But when the clock ran down to 6 seconds,
Roberson was the only guy open.

He got the ball and was well covered by the 6-7 Hayes at the top
of the key -- but unstoppable nonetheless.

"Some of the shots he made were really incredible,'' Florida
coach Billy Donovan said. "That's what great players do.''

Referee Ted Valentine checked the replay to make sure there was
no time left when the ball fell through the bottom of the net.
There wasn't, and Florida had its first buzzer-beating win at home
since 1993.

Roberson heated up during a seven-minute stretch in which
Florida went on a 23-4 run, turning a 10-point deficit into a 58-49
lead. Roberson made three 3-pointers and Bonner scored 12 points
during the stretch.

Lee finished with 16 points and Bonner had 15.

Hayes' twin brother, Jonas, and Ezra Williams finished with 10
points each, although Williams didn't score in the second half.
Georgia failed in its attempt to win nine straight for the first
time since 1983, the only time it has made the Final Four.