SALT LAKE CITY (AP) -- Bob Huggins was sent packing, as was his
team. Gonzaga, meanwhile, is back to its ol' tricks at tourney
time. 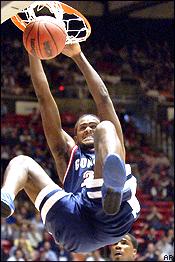 Ronny Turiaf had 22 points, including a school record-tying 16
free throws, and 10 rebounds as ninth-seeded Gonzaga held off
late-charging Cincinnati 74-69 Thursday in the West Regional.

"We have a flare for the dramatic," Gonzaga coach Mark Few
said. "They made a run at us and we were lucky to hang on."

His Bulldogs like being underdogs at the NCAAs, even if this
time they were playing a team slotted just one seed higher.

Gonzaga -- which made runs from low seedings to the round of
eight in 1999 and round of 16 the next two years -- has one
first-round loss in the past five tournaments. That came last year, when Gonzaga was seeded sixth and was bounced by No. 11 Wyoming.

The Bulldogs next face top-seeded Arizona in the second round
Saturday.

"Coach is everything to us," said Taron Barker, whose 16
points led the Bearcats. "That motivated us, but it hurt us, too,
because he would have fired us up."

Cincinnati's coach was ejected with about 16 minutes left, along
with team radio announcer Chuck Machock, for arguing a traveling
call on Jason Maxiell.

Huggins jumped in the air, landed with a two-footed stomp and
quickly drew a technical. He continued to complain and a minute
later was called for a second technical by official Mike Kitts.

Huggins had a heart attack in September and unabashedly said at
the time there wouldn't be any change in his trademark sideline
intensity. He was true to his word Thursday.

After the game, Huggins wouldn't talk about the ejection.

"I don't know that this is more disappointing than any other
year. It's hard when you lose," he said. "We don't feel good when
we lose."

Blake Stepp (12 points, seven assists) made all four free throws
on the technical fouls to give the Bulldogs a 51-40 lead.

Cincinnati fell behind by as many as 12 points, but it kept
chipping away the deficit until the very end.

The Bearcats often had trouble with their shooting this season
and that didn't change Thursday, when they made just 39 percent of
their field-goal attempts.

Leonard Stokes was just 2-for-10 for seven points, and Tony
Bobbitt was 3-for-12 for eight points.

Still, the Bearcats had a chance to tie it after rallying down
the stretch. Cincinnati used an 8-1 run to pull to 71-66 with 1½
minutes left on Stokes' putback after two misses.

Then the Bearcats got another break when Gonzaga's Tony Skinner
was all alone, went up for a dunk ... and missed.

But Skinner made up for it right away on the other end, blocking
Bobbitt's 3-point attempt that would have tied the game.

"To come back with a great play like that was huge," Few said.
"I kidded him afterward. I said, 'I knew you'd make a play to win
the game.' I just thought it would be on the breakaway.'"

Turiaf got the ball, was fouled, and sealed the victory with two
more free throws, tying Frank Burgess' school record from the
1960s.