SALT LAKE CITY (AP) -- Those ever-lovin' Zags almost did it
again, this time in a double-overtime thriller against top-seeded
Arizona. 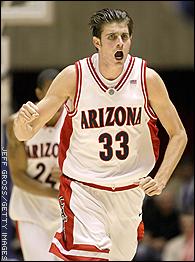 If the Wildcats win the national championship, they will always
know that this was the one that came a few missed shots by Gonzaga
from ruining it all.

Salim Stoudamire, quiet most of the intense evening, scored five
points in the second overtime as the Wildcats held off the
ninth-seeded Bulldogs 96-95 Saturday in a game that ranks with the
best in NCAA tournament history.

"That,'' Arizona's Jason Gardner said, "was definitely an ESPN
Classic.''

Gonzaga nearly pulled off an upset that would have dwarfed
anything the Bulldogs did during their exhilarating tournament runs
in 1999, 2000 and 2001.

"Of all the teams I've had at Gonzaga, I've never been more
proud,'' coach Mark Few said.

Stoudamire's floater in the lane with 2:03 left in the second
overtime were the game's final points. Gonzaga (24-9) had numerous
chances to take the lead but failed.

"That's the greatest game I ever played in,'' Arizona's Rick
Anderson said. "I could see it in their eyes. Everybody on the
court wanted to win.''

Tony Skinner, whose career-high 25 points included 5-of-11
shooting on 3-pointers, missed an open 3 with 4 seconds to play for
the Zags.

Blake Stepp, who scored 19 of his 25 points after halftime,
missed a 5-foot follow-up bank shot just before the buzzer sounded.

"It just didn't go in for me,'' Stepp said. "That's probably
the hardest game I've been a part of in terms of two teams fighting
it out.''

The Bulldogs collapsed to the floor in disappointment, and
Arizona (27-3) advanced to the West Regional semifinals against
Notre Dame, a winner over Illinois on Saturday.

With starters Ronny Turiaf, who scored 16, and Winston Brooks
fouled out, Gonzaga's offense finally wilted. The Bulldogs went
scoreless the last 2:10 after Skinner's two free throws put them
ahead 95-94.

"If you did not care who won, it was a great college basketball
game,'' Arizona coach Lute Olson said. "That was not a game for
people who weren't willing to lay it out on the floor.''

"My teammates just showed confidence in me, and forgot all
about the earlier shots,'' Stoudamire said. "They said we needed
some big shots, and I hit 'em.''

Arizona had the ball with 20 seconds to go, but lost it out of
bounds. One official signaled possession to the Wildcats, but
another overruled him and gave Gonzaga its last shots.

Turiaf, who fouled out with 2:16 left in regulation, could only
watch.

"I know I could bring something to the table for my
teammates,'' he said. "I'm sitting there on the bench and I can't
do anything about it. One stop, and we get a win. It didn't happen,
and it's too bad.''

Gardner made three of four free throws in the finally 25.1
seconds of regulation, but missed the fourth. Stepp missed his
second consecutive 3-pointer but Skinner put in the rebound at the
buzzer to tie it at 78 to the delirious delight of the vast
majority of the capacity crowd at the Jon M. Huntsman Center.

Arizona built an 87-84 lead on Gardner's two free throws and
Anderson's inside basket on a pass from Walton in the first
overtime. But Stepp sank a 3-pointer from the top of the key to tie
it at 87 with 1:10 to play.

Walton threw the ball away on Arizona's next possession, then
Few called timeout. Gardner tied up Richard Fox for a jump ball,
the possession arrow went to the Bulldogs and Fox scored on the
inbounds play to put Gonzaga up 89-87 with 14.5 seconds to go.

Walton powered the ball inside to tie it at 89, and Stepp's
3-pointer from just inside midcourt was off the mark at the buzzer,
bringing on the second overtime.

Trailing 44-41 at the half, the Wildcats scored the first seven
points of the second half, four by Frye. The run reached 13-4 on
Frye's two free throws that put Arizona ahead 54-48 with 14:17
remaining.

But the team that topped the national rankings for 13 weeks
couldn't shake the cool, aggressive Bulldogs.

The Zags went to the round of 16 three of the last four years,
and to the regional finals in 1999. They were anything but
flustered by the Wildcats, who shot 52 percent in the first half
and still found themselves trailing by three at the break.

Skinner, who averaged just under nine points a game in the
regular season, scored 15 in the first half. Turiaf added 12.