Editor's note: This story first appeared in March 2013. An updated ending has been added following the court storming at Kansas State Monday night after the Wildcats defeated Kansas.

No one can claim more firsthand knowledge of the danger of fans storming the court than 27-year-old Arizonan Joe Kay.

"I know it's a one-in-a-million thing that somebody would be seriously injured or die," says Kay.

"Granted, I was small potatoes, a high school player in Tucson, but it seems nothing was learned." 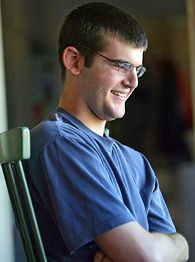 A 6-foot-6 high school valedictorian, Kay was a basketball and volleyball star headed to Stanford, with expectations he'd continue to enjoy what came naturally.

Using his right hand with dexterity.

Nine years ago, Kay's breakaway dunk climaxed a big rivalry win for Tucson High, the night before his 18th birthday.

In the ensuing euphoria, Feb. 6, 2004, his school's fans stormed the court and the talents Kay had taken for granted were gone in an instant. Kay was thrown to the floor and suffered a torn carotid artery and a stroke, leaving him paralyzed on the right side.

"It seems like over the last five years it happens a lot more often," Kay says now of the oft-televised scenes of fans storming the court, adding, "Nobody remembers me."

The memorable high school career that came crashing down that night in '04 included Kay's being named the state's student of the year and athlete of the year as well as the region's top saxophone player, and he earned three perfect SAT scores in math.

Three years later, when Kay agreed to Outside the Lines' request for his first national TV interview about the ordeal, he was a Stanford sophomore, who got around the vast Palo Alto campus in a motorized cart. He'd undergone eight months of rehab, transforming himself from a righty into a lefty and relearning how to walk, talk and think, while coping with aphasia.

Stanford honored Kay's volleyball scholarship and he graduated in 2009. Kay also founded a disabled students advocacy group and wrote an ESPN.com column on the obstacles he and others faced.

Now in the first half of a two-year graduate program in social work at Arizona State, Kay doesn't say court-storming should be abolished, but that "it should not be so commonplace -- it used to be very seldom, only for a huge win, we need to backtrack and make it that way again.

"ESPN and others always show it on the highlight reels -- maybe if they didn't, fans wouldn't have that same want and need, perhaps it would simmer down.