TACOMA, Wash. -- Former "Newlywed" Nick Lachey announced a new union Wednesday -- and no, it has nothing to do with Jessica Simpson. 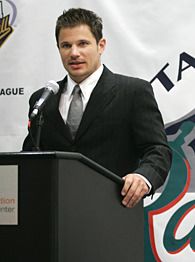 Lachey was introduced as a part-owner of the Tacoma Rainiers, the Triple-A affiliate of the Seattle Mariners. Before Wednesday, Lachey had no connection with the waterfront city 30 miles south of Seattle, other than occasional performances at the nearby Tacoma Dome.

Now, he's part of the Schlegel Sports Group based out of Dallas, and a one-third owner of the Rainiers.

"Sports for me, other than what I do for a living, is truly my passion, and baseball has always been something that is a part of my life," said Lachey, who grew up a Cincinnati Reds fan. "Being able to do what I do for my career, thankfully I've been blessed enough to be able to do well in that, to have other opportunities and this is one of them."

Lachey's signing career is in the midst of an upswing since his divorce from Simpson, which was finalized June 30. His new solo album, "What's Left of Me," debuted at No. 2 on Billboard's album chart in May, and he just completed a 26-city tour.

Lachey's sang openly about divorce-driven heartbreak and angst on the title track and in songs such as "I Can't Hate You Anymore." The former stars of the MTV reality show, "Newlyweds: Nick & Jessica," filed for divorce last December after three years of marriage.

Lachey wasn't interested in talking about his ex-wife Wednesday, instead focusing on his new venture. It's the second time Lachey has been involved with an ownership group. He was a small player in a group that attempted to buy his hometown Reds last year. That experience confirmed to Lachey he wanted a piece of a sports franchise.

"A couple of years ago when the Reds came up for sale my interest there was they're my hometown team and I want to be involved in the team and the city and obviously that didn't work out," Lachey said. "But it gave me the feeling that being involved in an ownership group was something I really wanted to do. When this opportunity came about it felt like the right one."

"The PR jolt he can give is huge," Schlegel said. "There's no better advertising than having a guy like Nick Lachey involved."

Schlegel and Lachey met through mutual friends in Los Angeles a few years ago, and the pair have been scouring the country for the right opportunity to enter business together. The new owners spoke extensively about providing an entertaining product to fans.

Tacoma has been home to a Pacific Coast League franchise since 1960. PCL President Branch Rickey pointed out other notable owners in the league -- Warren Buffet (Omaha), Nolan Ryan (Round Rock), and the Mandalay Entertainment Group (Las Vegas).

Rickey also knew when he followed Lachey at the podium Wednesday morning, that only one segment of the audience was paying attention to him.

"I'm speaking to the men," Rickey joked. "The women can keep looking where they're looking."